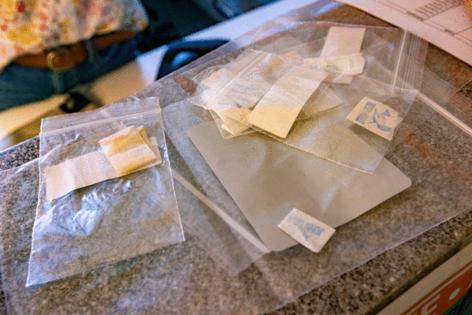 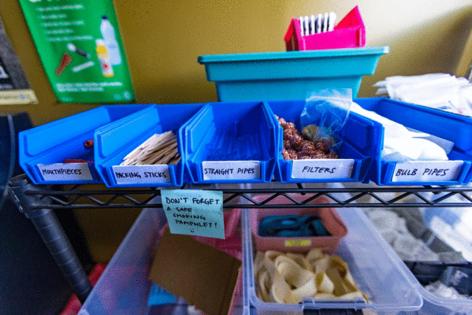 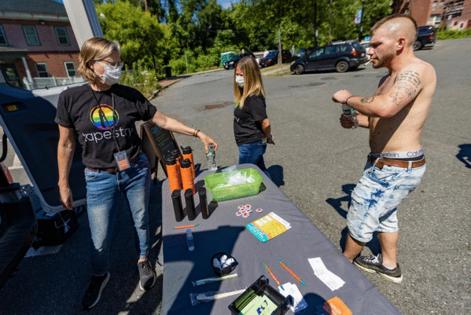 “Xylazine?” he asked, sounding out the unfamiliar word. “Tell me more.”

A street-outreach team from Tapestry Health Systems delivered what’s becoming a routine warning. Xylazine is an animal tranquilizer. It’s not approved for humans but is showing up in about half the drug samples that Tapestry Health tests in the rolling hills of western Massachusetts. It’s appearing mostly in the illegal fentanyl supply but also in cocaine.

“The past week, we’ve all been just racking our brains — like, ‘What is going on?’” Kyle said. “Because if we cook it up and we smoke it, we’re falling asleep after.”

(NPR and KHN are using only first names in this article for people who use illegal drugs.)

Kyle’s deep sleep could also have been triggered by fentanyl, but Kyle said one of his buddies used a test strip to check for the opioid and none was detected.

Xylazine, which is also known as “tranq” or “tranq dope,” surged first in some areas of Puerto Rico and then in Philadelphia, where it was found in 91% of opioid samples in the most recent reporting period. Data from January to mid-June shows that xylazine was in 28% of drug samples tested by the Massachusetts Drug Supply Data Stream, a state-funded network of community drug-checking and advisory groups that uses mass spectrometers to let people know what’s in bags or pills purchased on the street.

Whatever its path into the drug supply, the presence of xylazine is triggering warnings in Massachusetts and beyond for many reasons.

As Xylazine Use Rises, So Do Overdoses

Perhaps the biggest question is whether xylazine has played a role in the recent increase in overdose deaths in the U.S. In a study of 10 cities and states, xylazine was detected in fewer than 1% of overdose deaths in 2015 but in 6.7% in 2020, a year the U.S. set a record for overdose deaths. The record was broken again in 2021, which had more than 107,000 deaths. The study does not claim xylazine is behind the increase in fatalities, but study co-author Chelsea Shover said it may have contributed. Xylazine, a sedative, slows people’s breathing and heart rate and lowers their blood pressure, which can compound some effects of an opioid like fentanyl or heroin.