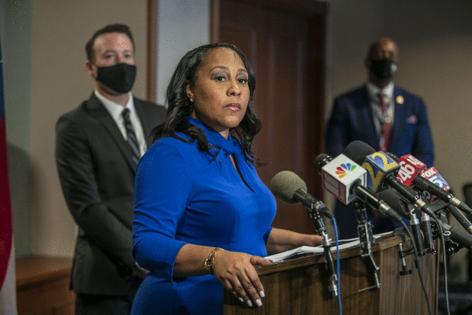 Dozens of witnesses, some from as far away as New York and New Mexico, have been subpoenaed by the 23-person special purpose grand jury appointed to aid in the criminal investigation, which is examining whether former President Donald Trump and his allies broke any state laws in their crusade to overturn Georgia's last presidential election.

The hard part, however, may have only begun.

Recent legal filings and courtroom appearances suggest that much of the probe's low-hanging fruit has already been picked. Prosecutors have seemingly spoken to the friendly — or at least non-hostile — witnesses who may have relevant information.

As District Attorney Fani Willis barrels closer to the Trump White House, she has fought off a tide of motions to kill subpoenas. She's countered arguments of legislative immunity, questions about her motives and attempts to remove her and her office from portions of the case — one of which was unexpectedly successful.

A far-right corner of the GOP has even started to push for Willis to be recalled, not unlike her San Francisco counterpart in June.

Over the last few days, the DA's office successfully blocked an attempt from Trump's personal attorney, Rudy Giuliani, to delay his testimony and argued before a federal judge that U.S. Sen. Lindsey Graham, R-S.C., shouldn't be able to dodge his summons.

That came during an extraordinary week in which FBI agents searched Trump's Palm Beach, Florida, residence at Mar-a-Lago, and the former president reportedly invoked his Fifth Amendment rights against self-incrimination more than 400 times during a sworn deposition before lawyers from the New York Attorney General's office.

In the days ahead, Fulton prosecutors will attend hearings in Santa Fe, New Mexico, and Fort Collins, Colorado, in the hopes that local judges will compel out-of-state witnesses to testify in Atlanta. And they are scheduled to question Giuliani under oath before the grand jury on Wednesday.

FORT LAUDERDALE, Fla. — There’s something very different about the Parkland gunman in videos that were shown most recently to the jury deciding his fate.

Until the prosecution began presenting its rebuttal case on ...Read More