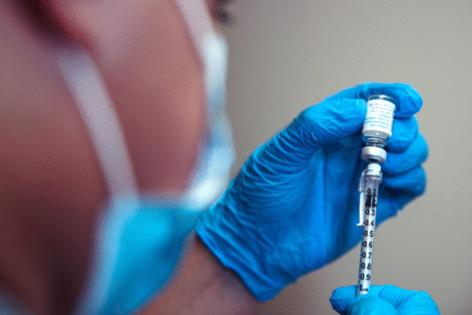 LOS ANGELES — Mark Webber and Doug Brown rose before dawn to make the trip from Agoura Hills, California, arriving around 6 a.m. at the Leimert Park clinic in the hopes of getting vaccinated against monkeypox.

"We came out in the '80s. We remember when HIV blew through," said Webber, 54, a Maryland resident who has been in Southern California to care for his late father. As monkeypox has arisen as a health threat, "we take it very seriously."

The line began to form hours before the Crenshaw Boulevard clinic began administering shots Wednesday, snaking through the parking lot of the St. John's Community Health site. Inside the clinic, health workers had split each vial of Jynneos vaccine into five doses, after federal officials gave the green light Tuesday to change the way the shots are administered.

In the broiling heat, St. John's nursing director Gale Castillo walked down the line of patients awaiting their shots, explaining what to expect: The vaccine would not be given subcutaneously — in the fatty tissue under the skin — but at a shallower level in the skin. "If you've ever had a TB test? Same thing," Castillo told them, displaying photos of the process.

The Jynneos vaccine, a shot approved by the Food and Drug Administration to protect against monkeypox, has been in limited supply as Angelenos try to avoid the virus. The infectious disease is rarely fatal, but can cause fevers, aches, swollen lymph nodes and painful lesions, and has forced people to isolate themselves for weeks.

As demand has outstripped supply, Los Angeles County has limited who is eligible for the vaccine, only offering the shots to people deemed to be at higher risk. It has also been urging health providers to prioritize giving out first doses of the Jynneos vaccine — meant to be provided in two doses at least four weeks apart — over ensuring that people get their second dose.

Federal officials also announced Tuesday that they would stretch the monkeypox vaccine supply by allowing medical providers to give smaller doses at a shallower level in the skin. The method, called intradermal injection, has been previously used with other inoculations in short supply. The FDA cited a clinical study that found the smaller, shallower doses generated a similar kind of immune response as subcutaneous injections. Doing so could effectively quintuple the number of available shots, since the method uses only a fifth of a full dose.

"I think that this is a very smart utilization of the vaccine," said Anne Rimoin, a professor of epidemiology at the UCLA Fielding School of Public Health. Rimoin said the plan was rooted in sound science, "but we will need to do some work to assess how effective it's going to be."

CDC director Dr. Rochelle Walensky told reporters Tuesday that the intradermal method was a better way of expanding vaccine access than only giving people a single shot. Dr. Rita Singhal, chief medical officer for the L.A. County public health department, said Thursday that it would "be opening up for second doses as we transition to the intradermal or alternate regimen."

"We feel pretty strongly that the two doses are necessary, in part because we simply don't have any evidence out ... months later after a single dose to know that people will be adequately protected," said Dr. Peter Marks, director of the Center for Biologics Evaluation and Research at the FDA. "And we don't want to give people a false sense of security."