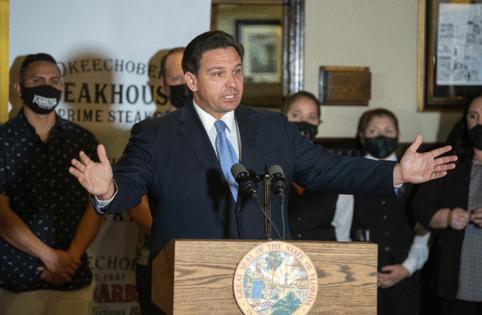 TALLAHASSEE — With Renatha Francis joining the Florida Supreme Court, Gov. Ron DeSantis will cement a majority of his own appointees in line with his legal philosophy and thus more likely to rule in his favor on lawsuits challenging the many controversial laws he has signed.

Her appointment is the latest example of how DeSantis has exerted his influence as governor of the third largest state in the nation, as he rolls toward a second term and positions himself for the 2024 Republican presidential campaign.

“Governor DeSantis seems to have been able to consolidate power and use more power than previous governors,” said Aubrey Jewett, an associate professor of political science at the University of Central Florida. “There is a lack of checks and balances that we’ve seen in the past.”

He’s aggressively pushed an agenda steeped in culture wars that gives him national exposure, brought Republican lawmakers and other leaders in line, and used his executive powers to punish any person or corporation, including the Walt Disney Co., who opposes him.

He has control over all the executive agencies that answer to the governor’s office. He’s barred schools and businesses from requiring masks, fought with cruise lines and tourist resorts over vaccine mandates and hindered parents’ efforts to vaccinate their own children against COVID-19.

He also can count on two of the three independently elected Cabinet members as allies who consistently back him up on his agenda. His only opposition on the Cabinet, Agriculture Commissioner Nikki Fried, a Democrat, isn’t running for reelection in November. Instead, she is running to unseat DeSantis.

The governor’s most recent move has brought even more attention. He suspended Andrew Warren, a twice-elected Hillsborough County state attorney for signing a statement promising not to prosecute people seeking or providing abortions and doctors providing transgender care.

“To take a position that you have veto powers over the laws of the state is untenable,” DeSantis said at a news conference announcing the suspension.

Attorney General Ashley Moody, a Republican, backed him up on a recent Fox & Friends appearance, saying he has a “duty to make sure the laws are faithfully enforced throughout the state. And he felt, based on prior statements, that he wouldn’t enforce the law.”