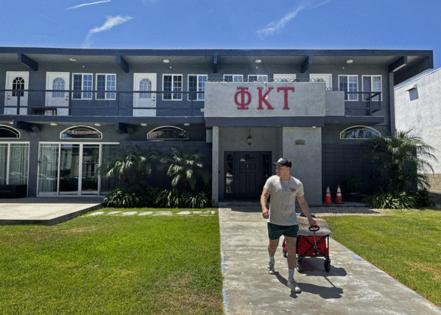 USC officials have given fraternities a Friday deadline to convey their decision, as students prepare to return to campus next week. Monique S. Allard, interim vice president for student affairs, told the Los Angeles Times on Friday that officials are still actively engaged in conversations to persuade fraternity leaders to stay affiliated and benefit from the vast health and safety resources offered by campus professionals.

Fraternities that choose to disaffiliate will lose the right to use the USC logo or brand, access the campus Greek life portal, participate in campuswide committees and club fairs and secure personal and professional leadership opportunities, according to an Aug. 6 letter sent by Allard and Devin Walker, director for fraternity and sorority leadership development.

“Like other universities across the country, we will strongly recommend that our students not join fraternities that are unaffiliated with USC,” the letter said. “In fact, we would post the names of unaffiliated chapters online and actively dissuade students from joining such organizations.”

Leaders with national fraternities and most of their USC chapters did not respond to interview requests. Judson Horras, president of the North American Interfraternity Conference, which represents 57 national and international men’s fraternities, was not available to comment.

The showdown at USC reflects a growing movement of fraternities to disassociate with their campuses to escape rules on drinking, rushing and other activities imposed to create safer environments, particularly for women. A 2019 survey of 182,000 students at 33 four-year campuses by the Association of American Universities found that fraternity houses were the top location cited in reports of nonconsensual sexual touching.

Fraternities have disaffiliated from such campuses as the University of Colorado, Boulder, West Virginia University, Duke University and the University of Michigan. Many objected in particular to bans against recruitment of first-year students during fall semester — a rule that USC also essentially imposes with requirements that students first complete 12 units of coursework and maintain a 2.5 GPA before being eligible to join a campus-affiliated fraternity.

USC and the fraternities have much to lose if they break their connection, said John Hechinger, author of “True Gentlemen: The Broken Pledge of America’s Fraternities,” a 2017 book on fraternity culture focusing on Sigma Alpha Epsilon.

“It’s kind of a nightmare for universities when fraternities disaffiliate ... because they’ll likely engage in a lot of the behavior that alarmed the administration but the school then has very little leverage left,” Hechinger said.

“These chapters are going to lose a lot too,” he added. “It can’t be good for fundraising or recruitment. Using campus facilities has great value. Being able to advertise on and recruit on the website is a big deal. And the fact that (USC) is going to actively discourage people could really hurt them.”