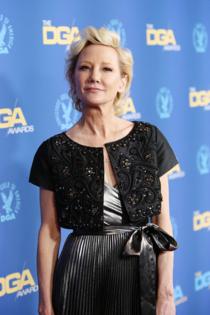 LOS ANGELES — Anne Heche, the Emmy- and Tony-nominated actor whose work in “Six Days Seven Nights,” “Another World” and dozens of other projects dovetailed with a groundbreaking romance with Ellen DeGeneres that challenged homophobia in Hollywood, has died. She was 53.

Her son Homer confirmed her death in a statement to the Los Angeles Times on Friday.

“My brother Atlas and I lost our Mom. After six days of almost unbelievable emotional swings, I am left with a deep, wordless sadness,” he wrote. “Hopefully my mom is free from pain and beginning to explore what I like to imagine as her eternal freedom.

“Over those six days, thousands of friends, family, and fans made their hearts known to me. I am grateful for their love, as I am for the support of my Dad, Coley, and my stepmom Alexi who continue to be my rock during this time. Rest In Peace Mom, I love you, Homer.”

Heche was removed from life support after being hospitalized after crashing her car into a Mar Vista home, which then caught on fire. After the Aug. 5 crash, Heche was rushed to a Los Angeles hospital in critical condition. She was declared brain dead Thursday night. As of Friday, Heche was legally dead, but her heart was still beating and her body was on life support to preserve viable organs for possible donation.

She suffered significant burns in the crash. On Thursday, a spokesperson for the Los Angeles Police Department confirmed that a blood test showed Heche was under the influence of narcotics at the time, and another law enforcement source told the Times that Heche’s initial blood test showed cocaine in her system.

Before Heche died, the LAPD was planning to administer a second blood test to rule out hospital treatments as the reason for narcotics showing up in her initial screen. Shortly after the crash, Heche fell into a coma with a major injury that required her to be put on mechanical ventilation, her spokesperson said.

By Thursday night, it was clear that Heche would not survive. A statement on behalf of her family and friends said the actor had suffered “a severe anoxic brain injury” and would be kept on life support to determine whether any of her organs were viable for donation, as had long been her wish.

“Anne had a huge heart and touched everyone she met with her generous spirit,” the statement said. “More than her extraordinary talent, she saw spreading kindness and joy as her life’s work — especially moving the needle for acceptance of who you love. She will be remembered for her courageous honesty and dearly missed for her light.”

Heche’s ex-husband, Coleman “Coley” Laffoon, said in a video that she “was brave and fearless and loved really hard.”