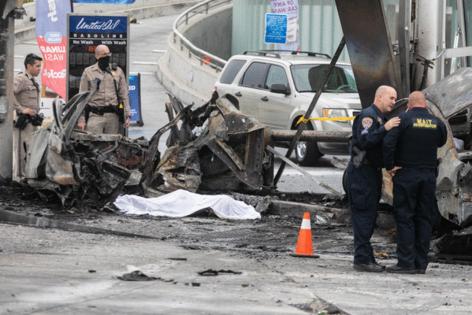 LOS ANGELES — Authorities investigating the crash in the Windsor Hills neighborhood that left five people dead are trying to sort out the actions and mindset of the nurse who prosecutors say plowed her Mercedes into the intersection.

Investigators are still trying to get a full account of what brought Nicole Lorraine Linton, 37, to the corner of Slauson and La Brea avenues last Thursday afternoon.

Linton, who has been charged with multiple counts of murder and vehicular homicide, was speeding more than 90 mph when she approached the busy intersection, authorities said.

The Mercedes does not appear to slow before running a red light shortly after 1:30 p.m. The light had been red for nine seconds before the car barreled through the intersection, slamming into multiple cars, prosecutors said.

Linton, whose permanent address is in Texas, had been working as a traveling nurse at a Kaiser hospital in West Los Angeles and lived near the health care facility off La Cienega Boulevard. Authorities believe she drove into Windsor Hills from the hospital but are not sure why she was driving so recklessly, sources told the Los Angeles Times.

It’s about four miles between the hospital and the site of the deadly crash, and investigators are trying to determine whether Linton was working a shift around the time of Thursday’s collision.

L.A. County District Attorney George Gascón said there is no evidence of any alcohol use by Linton at this point.

On Monday in court, Linton’s attorney, Halim Dhanidina, asked to continue her arraignment to October because he is reviewing her out-of-state history of “documented profound mental health issues.” Dhanidina did not elaborate on those issues but said the Windsor Hills crash could be linked to them.

Authorities are trying to determine whether Linton was supposed to be taking medications and if she was using them at the time of the crash, according to law enforcement sources who spoke anonymously because the investigation is ongoing.

At least six vehicles were involved in the crash, according to California Highway Patrol investigators. In addition to the fatalities, eight people were injured.

The impact of the fiery crash killed 23-year-old Asherey Ryan; her 11-month-old son, Alonzo Quintero; her boyfriend, Reynold Lester; and their unborn child. Ryan was 8 1/2 months pregnant when she was killed. The boy she was carrying had been named Armani Lester, according to the Los Angeles County coroner’s office.

Two additional women killed in the crash have yet to be identified.

Linton was hospitalized with moderate injuries for several days before being taken into police custody.