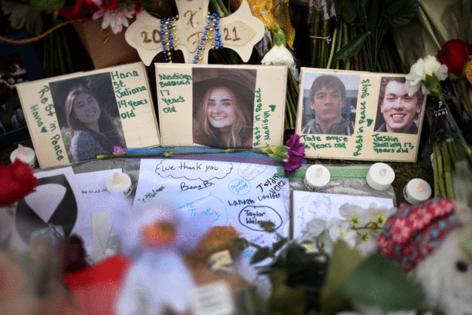 DETROIT — An Oakland County Circuit Court judge granted a request Wednesday on behalf of parents suing the Oxford Community Schools to add new allegations that an armed security guard at the high school could have prevented at least one student's death during the November mass shooting.

Judge Rae Lee Chabot approved Detroit attorney Ven Johnson's fourth amended complaint to the parents' lawsuit. Johnson alleged the security guard was working inside the high school when the shooting happened around 12:51 p.m. Nov. 30 and overlooked the shooter who was in the bathroom with two students.

"What's shocking and repulsive is an armed security guard with her handgun pulled looking at a bathroom where there's three people, one who is a fully armed Ethan Crumbley ... and she claims she didn't see anything," Johnson told the judge.

Four students died in the shooting: Hana St. Juliana, 14, Madisyn Baldwin, 17, Tate Myre, 16, and Justin Shilling, 17. Johnson has alleged the guard opened the door to a bathroom where Shilling was with Crumbley and another student and could have prevented Shilling's death.

Attorney Timothy Mullins, who represents the school district, said the 54-year-old security guard was the first responder to the scene. He requested that the motion be denied and that the parties proceed with the initial motion filed in March.

"She did not wait, hesitate, by herself without backup, drew her gun and went in pursuit of the gunman," Mullins told the judge. "I am shocked that a first responder, who didn't wait and went down the hallway by herself while all the other responders were gearing up with their body vests and rifles, would be added to this."

Mullins said continuing to add defendants wouldn't change the outcome of the motion or how it would apply to the Oxford schools after nine months.

Johnson responded that the guard could have stopped the remainder of what happened.

"Moments after she left the bathroom, Ethan Crumbley shot and killed Justin Shilling in front of Keegan Gregory, who then ran out the bathroom who escaped, luckily, with his life thinking he was going to get shot in the back the entire time," Johnson told the judge.

He added that Oxford wouldn't turn over surveillance footage to the parents, despite the judge's order to do so. Mullins said the footage is not with Oxford schools but with the Oakland County Sheriff's Office, which is leading the shooting investigation.