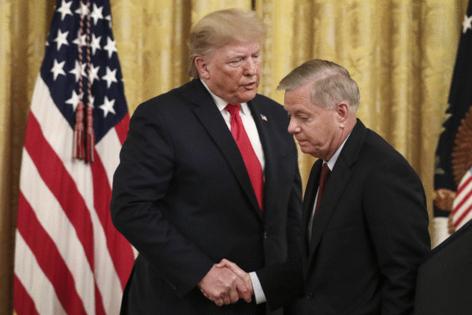 ATLANTA — Prosecutors with the Fulton County District Attorney’s office, who are leading the special purpose grand jury investigation into Georgia’s 2020 election, are interested in questioning U.S. Sen. Lindsey Graham about any coordinated effort there may have been between the South Carolina Republican and officials from the Trump campaign.

That became apparent Wednesday, as a federal judge heard a request from Graham’s attorneys to kill a grand jury subpoena.

More broadly, jurors and prosecutors are interested in discussing two phone conversations that Graham had with Georgia Secretary of State Brad Raffensperger and his office in the weeks following the 2020 elections, according to his subpoena.

During those conversations, Graham asked about procedures related to mail-in absentee ballots, though he and Raffensperger disagree about what the senator was implying.

During a two-hour hearing, Brian Lea, an attorney for Graham, argued the senator is shielded from testifying about the phone calls because of the U.S. Constitution’s “Speech or Debate” clause, which protects members of Congress from being questioned in court about issues that fall within their legislative purview.

But Fulton prosecutor Donald Wakeford said “there’s nothing legislative” — or normal — about a U.S. senator calling a secretary of state from a different state in the middle of a recount, and that such conversations are not protected by the Constitution.

Wakeford indicated that Graham’s calls might have been interconnected with similar efforts that were undertaken by Trump and his allies during the same time period, since several placed phone calls to high-ranking Georgia officials to pressure them to revisit election results.

Prosecutors in a court filing last week previewed some of the other questions they’d like Graham to answer before the grand jury. Among them are the circumstances that spurred Graham to call Raffensperger and what he sought and obtained from the conversation.

Judge Leigh Martin May of the U.S. District Court for the Northern District of Georgia did not say on Wednesday how she would rule on Graham’s subpoena, though she sounded skeptical about considering every aspect of the calls legislative. She urged the Republican’s attorneys to address in a new filing where protected legislative matters end and political, unprotected ones begin.

She said she’ll issue a final ruling on Friday or Monday.