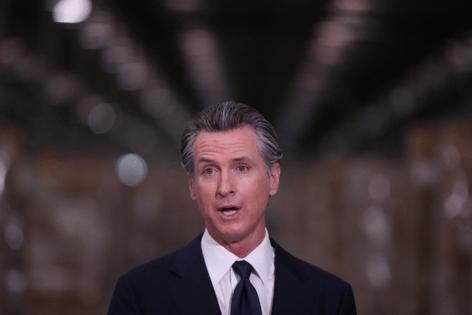 The proposal calls for lawmakers to enact more aggressive targets on state laws that reduce greenhouse gases and increase the use of renewable energy.

Newsom also called for a new law that would establish health and safety buffer zones around new oil and gas wells, restrictions his administration is trying to adopt though the state's slow-moving regulatory process.

Anthony York, a spokesman for Newsom, said that with just three weeks left before lawmakers adjourn for the year, the end of the session provides an opportunity for the governor to propel climate legislation through the statehouse.

"The larger point is just the nature of the climate crisis," York said. "It's gotten worse. We see it in our wildfires and our drought and the impact on energy supply and impacting our ability to keep the lights on. The governor thinks now is the right time to take bold action."

Newsom's push is as much an attempt to rally Democrats at the statehouse to address climate change as it is to hammer big oil companies.

Kevin Slagle, a spokesman for Western States Petroleum Association, said the outline of the governor's plan is concerning.

"Climate and energy policy is too important for all of us to be implemented by bans, mandates and these last-minute legislative proposals that are pretty far-reaching," Slagle said. "What we've seen is these will be expensive for California families. It's going to be devastating for a lot of workers and communities, and it will really affect large parts of our economy."

Newsom ran ads in Florida last month contrasting the state's restrictive polices on abortion rights and education with "the freedom of speech, freedom to choose, freedom from hate and the freedom to love" in California. The spots stoked speculation nationally about Newsom's presidential ambitions and bolstered the governor's image beyond California as a Democratic leader fighting back against the GOP.

The association of oil companies responded with their own advertisements in Florida warning about the cost of Newsom's climate policies.