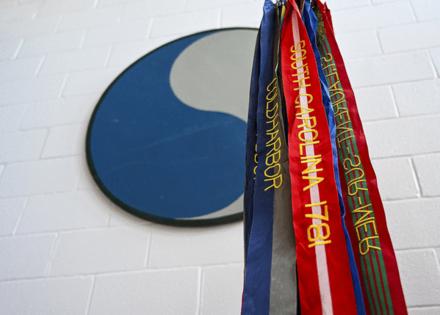 Formed as the Baltimore Independent Cadets in 1774, the unit helped save George Washington’s army at the Battle of Brooklyn in 1776, played a major role in saving Baltimore from British destruction at the Battle of North Point in 1814, hit Omaha Beach on June 7, 1944, and took part in the U.S. war on terror in the mid-2000s. Today, it’s a force of about 600 citizen-soldiers, with armories in Dundalk, Easton, Glen Burnie, Frederick and Silver Spring.

What’s little known today, however, is that many members of the unit split from the Union during the Civil War and took up arms for the South. Historians say most of its foot soldiers — largely working-class Baltimoreans who were, at best, suspicious of the intentions of President Abraham Lincoln — left for Virginia, where they reformed as the 1st Maryland Infantry Regiment (Confederate).

Enough of the outfit did so that the 175th gives their exploits a place of honor in unit history.

But a national Naming Commission tasked with reconsidering Confederate ties among the names of U.S. military installations and symbols is on the verge of changing that.

Like many units in the U.S. military, the 175th carries streamers, or commemorative military banners, atop its flag. They resemble long, colorful ribbons, each with lettering that names a campaign or battle in which the unit took part. People can see them on display in parades and color guard exercises. Seven of the unit’s more than two dozen streamers have blue and gray stripes and bear the name of a Civil War battle or campaign in which its soldiers fought on the Southern side.

The chair of the national panel, retired Navy Admiral Michelle J. Howard, has notified the House and Senate armed services committees that the panel will recommend the Army eliminate a 1949 rule that gave U.S. military units permission to fly streamers symbolic of battles in which they fought for the Southern side. The commission released her letter publicly Aug. 1.

“Forty-eight Army units have at least one Confederate campaign streamer; a total of 457 Confederate streamers are presently authorized,” Howard wrote. As a result of the recommendation, “those 457 Confederate battle streamers would no longer be authorized.” The units are spread across 11 Southern states, plus Missouri, with Georgia and Virginia having by far the most units that would be affected.

All indications are that the entities involved, the congressional committees and Secretary of Defense Lloyd Austin, will accept the committee’s recommendation. That would mean the streamers would be removed from service as early as next year.

If Austin approves the change, the Army’s Center for Military History and its subunit, the Army Institute of Heraldry, “would take those recommendations and push out guidance for changes, and we would adhere to them,” said Capt. Ben Hughes, a spokesman for the Maryland National Guard. “If they say, ‘Take those streamers off,’ those streamers would come off.”