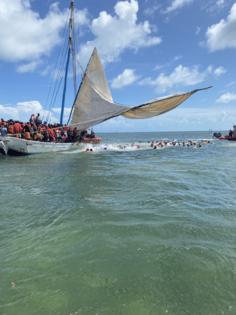 The people on board are likely Haitians — and their arrival comes just two days after a group of more than 300 people from Haiti arrived in a sailboat that grounded off the exclusive Ocean Reef resort community in north Key Largo.

The Keys have been the most frequent landing spot for fleeing Cubans and Haitians for more than a year. However, migrant activity within the island chain ramped up dramatically in the past week.

Between Thursday and Saturday, the Border Patrol took into custody 263 people, including the Haitian migrants, from a total of 16 landings, according to the agency.

Also last week, the U.S. Coast Guard said it is searching for five people who were among a total of 15 from Cuba whose vessel capsized Friday off Sugarloaf Key in the Lower Keys.

Two people from that boat were found dead, and eight others were rescued. As of Monday night, the search for the missing migrants continued.

It was not immediately clear how many people were on board the boat that arrived Monday, but residents posted on social media that they saw at least 100 people walking through neighborhood streets escorted by local police and federal agents.