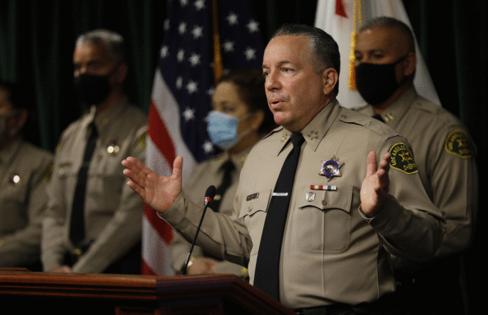 LOS ANGELES — Los Angeles County prosecutors are convening a criminal grand jury to investigate whether the Sheriff’s Department mishandled an incident in which a sheriff’s deputy kneeled on a handcuffed inmate’s head for three minutes, according to documents and interviews.

Several subpoenas have been served ordering sheriff’s officials to appear and testify starting later this week, according to two sources with knowledge of the subpoenas. Prosecutors are also seeking communications by a number of sheriff’s executives, one of the sources said.

It’s unclear how many subpoenas were issued or who received them. It’s also unclear whom prosecutors are targeting in their investigation. The district attorney’s office on Monday declined to comment.

The activity is a major development in the case. Sheriff Alex Villanueva has been accused by three high-level executives of trying to keep the March 2021 incident — exposed by The Times this year — under wraps. The incident drew national attention when Villanueva announced that the reporter who wrote the story was under criminal investigation. He quickly took back those remarks.

Villanueva said in a statement Monday that the department was notified last week of a criminal grand jury subpoena for records related to the incident and that “we are conducting a thorough internal investigation, and we are fully cooperating with this subpoena.”

He added: “To date, our investigation indicates that the allegation of misconduct was orchestrated by involved Department executives to falsely portray themselves as whistleblowers in order to avoid discipline, up to and including termination. The District Attorney has been given this and all other relevant information.”

The investigative grand jury can also recommend charges, which prosecutors can file down the line, whereas an indictment grand jury is “responsible for looking for evidence that was already put together by prosecution,” Jackson said.