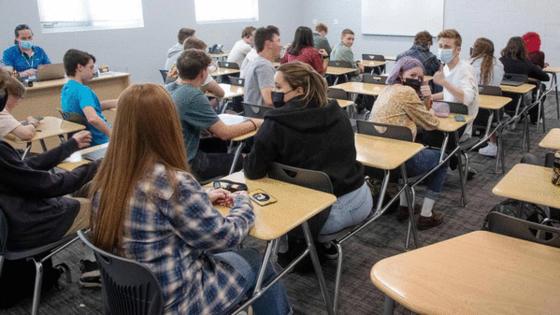 BOISE, Idaho — The West Ada school board on Monday approved a revised policy that gives teachers new guidelines on what they can display in their classrooms.

The revision, which passed unanimously, was part of an update to the district’s policy on the duties and responsibilities of certified staff.

The policy lists items teachers can display — including the Idaho state flag and banners connected with curriculum, achievements or student work — but clarifies that the policy doesn’t limit teachers’ displays to what is on that list. It also said the district believes the American flag should be displayed in every classroom.

“School property shall not be used by personnel for the advancement of individual beliefs,” the policy said. “It is the desire of the district that the physical environment of district facilities be content neutral, conducive to a positive learning environment and not a distraction to the educational environment.”

The goal of the updated policy was to make sure it aligned with updates to Idaho law and to ensure district schools remained “content neutral and positive learning environments,” spokesperson Greg Wilson said during the meeting Monday. The policy applies only to what can be “flown, posted or affixed to the physical property of the district,” the policy said. It does not apply to what teachers can wear or what they teach, which is addressed in other areas.

“This policy is about creating the best environment possible for student learning and is consistent across our school district,” Wilson said.

West Ada Education Association President Zach Borman previously raised concerns about the exclusion of the LGBTQ pride flag from the list of items teachers could display. He said he understood why the district wanted to “ensure political neutrality,” but that where he found the policy problematic was “that it ends up implying some items that are human rights issues as political in nature.”

He told the Statesman Monday his “concerns stand.” But he said he knows teachers will do everything they can to create welcoming environments for students.

“As an association, we’ll be looking for ways in the future that we can ensure that these kids are welcomed, protected, in whatever ways that we can,” he said.

LGBTQ youth are more likely to have seriously considered suicide, been bullied at school and felt sad or hopeless than their peers, according to the Centers for Disease Control and Prevention.