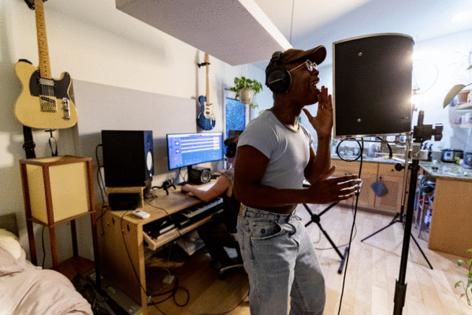 He finds himself second-guessing how close people are getting to him at bars or music venues. He got nervous when his boyfriend said he had scheduled a massage. He has even avoided trying on clothes when out shopping, worried that the virus could spread on contaminated fabric.

“I haven’t necessarily stopped going out,” said Kalu, a queer man living in West Hollywood, “but I’d be lying if I said that monkeypox wasn’t on my mind 24/7.”

For many Californians — especially gay and bisexual men — worries about the disease have transformed the ways they have fun and connect.

Right now, Kalu is not eligible for a vaccine to combat monkeypox, an infectious disease that can cause painful lesions. The scarcity of vaccines to combat the virus, which has disproportionately hit men who have sex with men, has led health agencies to limit who can get the shots as they await more doses.

So gay and bisexual men, transgender people and others worried about their risk are coming up with practical strategies to protect themselves as they wait for vaccinations. The virus can spread through skin-to-skin contact with lesions, scabs or infected fluids, as well as through contaminated clothing or bedding. Health officials say it can also travel through respiratory droplets.

The illness is rarely fatal, but can be excruciatingly painful, leave enduring scars, and force people to isolate for weeks. Dr. Kaiyti Duffy, chief medical officer for the Los Angeles LGBT Center, said some patients have suffered lesions that make it agonizing to sit, stand or have a bowel movement. The need to isolate has also forced some patients to “out themselves” to employers, she said.

“The government needs to produce more vaccine and get it in the arms of people who need it — like now,” said Matthew J. Mimiaga, a professor of epidemiology and psychiatry who directs the UCLA Center for LGBTQ+ Advocacy, Research and Health. “But I don’t think gay and bisexual men will let that be the only prevention opportunity that they take.”

As of Thursday, more than 1,300 monkeypox cases had been reported across California, including more than 450 in the Los Angeles and Long Beach areas.

Alarm over the spread of the virus, which prompted emergency declarations from Gov. Gavin Newsom and the Biden administration last week, has spurred many queer men and transgender people to change how they are socializing, celebrating, and seeking love and sex. Some said they were steering clear of crowds or not seeking out new partners.