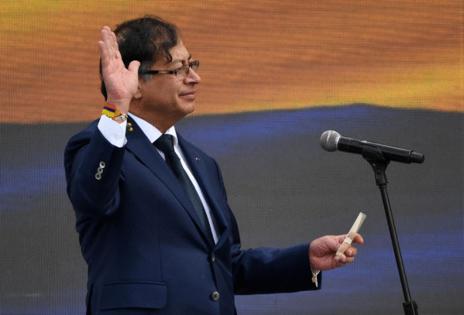 Gustavo Petro assumes control of an economy with government debt near record levels, which will make it tough for him to meet promises of more education and welfare spending while preventing the fiscal deficit from ballooning out of control.

“We propose a tax reform that generates justice,” Petro said in his first speech as president, in Bogota’s central plaza. “To take a part of the wealth of the people who have the most, to open the doors for education for all children and young people.”

The new government is planning health, pension, labor and education reforms, he said.

Petro, 62, defeated a construction magnate in the June presidential election to become the first leftist to win power in a country that has only ever been run by conservatives and liberals. With his victory, Colombia joins the ranks of nations worldwide that have voted in anti-establishment leaders recently. In Peru, a school teacher from a Marxist party became president last year, while Chile elected a former student protest leader.

Petro, an ex-guerrilla and former Mayor of Bogota, has pledged to tax big landowners, halt the awarding of oil exploration licenses and to rebuild diplomatic relations with the socialist government of neighboring Venezuela.

While diplomatic ties between the two nations were severed in 2019 amid a push by Colombia and the U.S. to force out the socialist government of Nicolas Maduro, Petro has vowed to re-establish ties and open the border for commerce.

In the Venezuelan border town of San Antonio del Tachira, revelers danced and cheered at a concert to celebrate improving relations between the two nations, which promises to make their lives much easier.

“There are two nations here that have been separated by politics and that hope and wish the new government can reunite them,” Victor Corredor, 67, said as he attended the concert he helped organize.