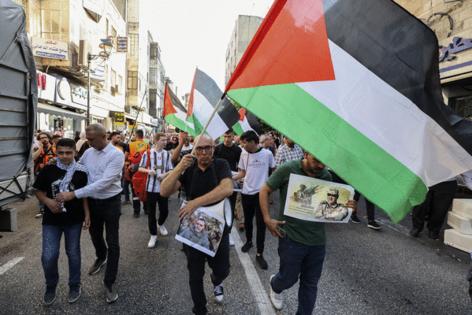 Egypt mediated a deal to end three days of violence between Israel and the Islamic Jihad that left 44 people dead in the Gaza Strip, including two senior militants and 15 children, and sent thousands of Israelis into shelters to avoid the almost 1,000 rockets launched at Israel.

“We announce the start of a cease-fire starting at 11:30 p.m. today and we welcome the Egyptian efforts,” Islamic Jihad said in a statement sent to reporters. The group said, however, that it maintained the “right to respond to any Israeli aggression.”

In Israel, the head of the National Public Diplomacy Directorate issued a statement confirming that the truce would take effect at 11:30 p.m. Sunday. “The state of Israel thanks Egypt for its efforts,” the statement said. It said Israel also reserved the right to “respond strongly” to any violations.

The latest Israel-Gaza confrontation began last week when Israel killed a militant leader of the Islamic Jihad, Taysir al-Jabari, commander of the group’s Al-Quds Brigades in Gaza City and the northern Gaza Strip. His group, considered to be closely affiliated with Iran, retaliated with rocket attacks, and the Israeli air force responded by striking weapons production and storage facilities as well as rocket launchers.

A second senior Islamic Jihad militant, Khaled Mansour, was killed by Israel on Saturday. The Israeli army spokesman’s office said both men were responsible for planning and carrying out attacks.

“We are basically very close to our goals, and that is good reason for us to cease the operation,” Meir Elran, former deputy commander of Israeli military intelligence, said in a call with the Jerusalem Press Club on Sunday before the truce was officially announced. “It’s my interpretation that it is time for us to return home.”

Hostilities continued, as is often the case, even 15 minutes before the truce was to go into effect. Air raid sirens sounded in Beersheba and in towns south of the city signaling rocket attacks, and the Israeli army said it was striking “terror targets belonging to the Islamic Jihad.”

After the 11:30 deadline, eyewitnesses in Gaza reported the firing of a rocket, and sirens went off in the Israeli area closest to Gaza. The army said that it had not carried out any air strikes after the truce went into effect. Experts said that rockets are often set on timers, and it takes time for the Palestinians to get to them all to cancel their launches.

A pause in hostilities would allow diesel fuel to be delivered to the Gaza Strip’s power plant. The plant normally provides 16 hours of electricity each day: two eight-hour stretches with an eight-hour pause in between. Without the fuel it will only be able to provide six hours of electricity each day. The cease-fire would also allow Palestinian workers to return to jobs in Israel.

News that the husband of Halyna Hutchins has reached a settlement with actor Alec Baldwin and other producers over her shooting on the set of “Rust” stunned many in Hollywood and beyond.

After all, Matthew Hutchins ...Read More