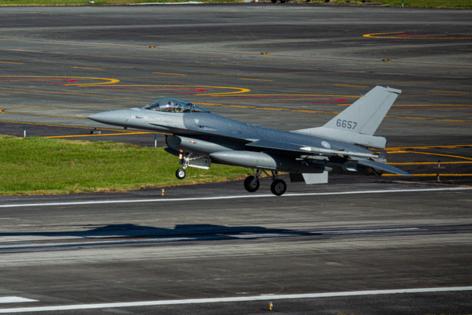 Taiwan reiterated it won’t succumb to pressure from China after days of military drills in the air and seas surrounding the island, with hostilities set to continue even as world leaders urge an end to the strife.

The People’s Liberation Army said it conducted exercises around Taiwan on Sunday, with drills focused on testing the capabilities of joint firepower on long-range air and ground strikes. China didn’t say if the military maneuvers — earlier reported to take place until midday Sunday — are over or if they will be extended.

Taiwan said the Chinese drills again simulated attacks on its main island as well as Taiwanese ships. China also deployed drones near Taiwan’s outlying islands, the Defense Ministry said, adding it responded by sending airplanes and ships and monitored the situation through surveillance and reconnaissance.

The PLA flew some 66 sorties on Sunday, including 22 that crossed the southwest Air Defense Identification Zone, the ministry said. Some 14 Chinese warships were detected around the Taiwan Strait as of 5 p.m. local time. Separately, a drone was found approaching the restricted waters of the Kinmen area and was driven away by flares, Taiwan’s army said.

Beijing has carried out its most provocative military drills in decades in the wake of House Speaker Nancy Pelosi’s trip to Taiwan last week. It has also likely fired missiles over the island of 23 million people, sent warships across the Taiwan Strait’s median line, and flew waves of warplanes across the U.S.-defined boundary.

“China has brutally used military actions to disrupt regional peace and stability,” Taiwanese Premier Su Tseng-chang told reporters on Sunday. “We will never bow to pressure. We uphold freedom and democracy, and believe Taiwanese disapprove China’s bullying actions with force and saber-rattling at our door.”

“It is not only Taiwan that suffers,” he said. “Neighboring countries have protested loudly, and freedom-loving and democratic countries such as the United States have strongly condemned it.”

Beijing denounced the visit by Pelosi as a violation of the U.S. pledge 50 years ago not to formally recognize the government of Taiwan, which China claims as its territory. It announced on Friday a set of measures including cutting off defense talks with the U.S., marking a further deterioration in relations between the world’s biggest economies.

China is engaging in increasingly destabilizing action, U.S. Secretary of State Antony Blinken told reporters on Saturday, saying he’s communicated that to his Chinese counterpart Wang Yi. Blinken said tensions between the U.S. and China need to be de-escalated, and that he’d told Wang that lines of communications between the two sides must be kept open.