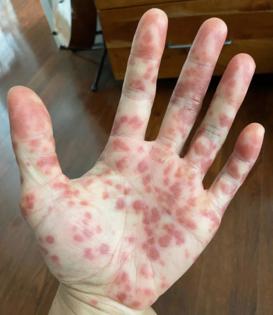 “Everything started rapidly getting worse,” the Emeryville, California, resident said. “I started to get more spots, on my face, more redness and they started leaking fluid. The rash expanded to my elbows and my hands and my ankles.”

It took Kwong, 33, six virtual appointments with doctors and nurses, one call to a nurse hotline, a trip to an urgent care clinic, two emergency room visits, and two incorrect diagnoses before an infectious disease specialist diagnosed him with monkeypox in early July.

As the number of monkeypox cases has exploded in the U.S. in the past month, the public health system is struggling to spread the word about the virus’s danger and distribute a limited supply of vaccines to vulnerable people. But the problem extends even further. People who may be infected are grappling with dead ends, delays, incorrect diagnoses and inappropriate treatments as they navigate an unprepared and ill-informed health care system.

The once-obscure virus has hospitals racing to teach emergency room staffers how to correctly identify and test for it. Dr. Peter Chin-Hong, the infectious disease specialist at the University of California, San Francisco who ultimately diagnosed Kwong, said his case was a tipping point for the research hospital.

“Kevin came in the middle of the night when a lot of resources weren’t available. So I think after his case, we’re doing a lot more education of the general condition. But I think your average clinician doesn’t always know what to do,” Chin-Hong said.

Monkeypox is caused by a virus in the same family as smallpox, though it’s not as transmissible or fatal. Typically, patients have a fever, muscle aches, and then a rash on their face, mouth, hands and possibly genitals that can last for several weeks.

The current outbreak is spreading via human-to-human contact, such as touching a lesion, or exchanging saliva or other bodily fluids. People can also become infected by touching objects or surfaces, such as sex toys or sheets, shared with someone with the illness.

The first U.S. monkeypox case of this outbreak was reported May 17, and since then, the number has grown to more than 6,300 probable or confirmed cases representing almost every state, plus Washington, D.C., and Puerto Rico.