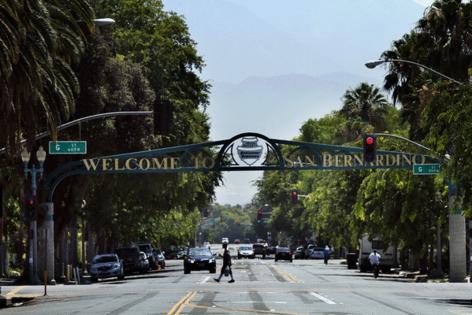 LOS ANGELES — A measure that would allow San Bernardino County supervisors to explore secession from the state of California could be put to county voters in November.

The Board of Supervisors approved the ballot measure at a meeting Wednesday night after the issue had been raised at several board meetings. Wednesday's vote was the first step in adding the measure to the ballot, to be followed by a second and final reading and vote scheduled for next week.

Even if approved by voters, the county's secession from California, whether to become its own state or to become a part of a neighboring state, is extremely unlikely. The move would need to be approved by state legislators, Congress, the Senate and, eventually, the president.

At last week's board meeting, speakers and board members expressed frustration at the amount of funding San Bernardino County receives from the state, a point that made its way into the proposed ballot language.

"Our Sheriff's Department, our judges, are constantly taxed with too much with not enough resources," Jeff Burum, chairman of development firm National Community Renaissance, said at the meeting.

Burum urged the board to put a secession measure on the ballot and was backed by Fontana Mayor Acquanetta Warren and Upland Mayor Bill Velto.

"The last line is the most controversial because the rest of it's like a no-brainer," board Chairman Curt Hagman said Wednesday, referring to the clause about options "up to and including secession."

The measure would allow the board to expend staff resources to study the funding San Bernardino County receives from the state.

"Then we can look at options," Hagman said. "How do we lobby for more? How do we put our state representatives on notice that, hey, we're not getting our fair share?"