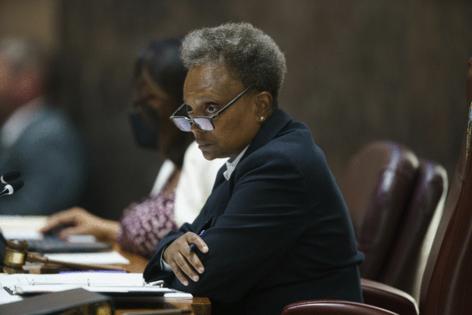 CHICAGO — Days before aldermen were set to vote on Chicago Mayor Lori Lightfoot’s controversial plan to sue gang members as an anti-violence strategy, she texted an impassioned message to several City Council members seeking their support.

“We must send a strong message to gangs that we will take away their profits which last year was over $26M. I would not press this without the appropriate checks and balances and as you know, we will have to file in court, and a judge will determine whether we have met our burden of proof,” Lightfoot said in a text message, which she apparently copied and pasted to several individual aldermen in February.

“To me, this will be an essential tool we need in the crime fight. I hope we can count on your support. Let me know if you have any further questions.”

Despite the personal outreach, however, Lightfoot has so far failed to gather enough support for her so-called Victims’ Justice Ordinance, which would allow the city to sue gang members and attempt to seize their assets. Days after Lightfoot launched her effort to personally lobby aldermen, two City Council allies moved to delay a vote on the ordinance, and she hasn’t brought it back for consideration.

When asked about the delay, the mayor has said she needs to “educate” members about the importance of the legislation, which faced criticism from all sides of the political aisle.

Fraternal Order of Police President John Catanzara previously blasted the plan as a “waste of everyone’s time to pretend she is doing something of substance.” Civil rights lawyers, meanwhile, argued the city would end up violating people’s civil rights and seizing property from grandmas who aren’t involved in gang life, creating more problems down the road.

Lightfoot’s inability to marshal enough support for a law she said was key to public safety reflects the broader challenge she has faced building strong relationships with other elected officials across the state. Aldermen frequently criticize the administration for a lack of communication and Lightfoot does not often lobby City Council members directly for their support.

The City Council won’t be back in session until September, which will mark a full year since Lightfoot introduced her ordinance. Her hand-picked public safety committee chair, Alderman Chris Taliaferro, told the Chicago Tribune he doesn’t know if the proposal is coming back “because it is her ordinance, but I have not heard anything from her on that. I’ve not heard anything on whether she’s planning on pursuing that any further.”

Getting aldermen to support the measure will likely remain a challenge, though she may yet be able to generate support by pressuring City Council on crime. Her efforts in February stalled, however, as text messages released by the city illustrate. North Side Alderman Matt Martin, a freshman council member, responded to Lightfoot’s text, “I know that we all view public safety as our top priority, and recognize the need to urgently address the trauma and instability that street gangs continue to cause.”

“While I will not be supporting the VJO (Victims’ Justice Ordinance), I share your commitment to utilize many other tools to improve public safety in both the short and long term — including expanding reach of violence prevention organizations and our summer youth employment program, increasing the number of detectives, and strengthening our area and regional carjacking task forces,” Martin wrote, according to records released by the mayor’s office in response to a Freedom of Information Act request.