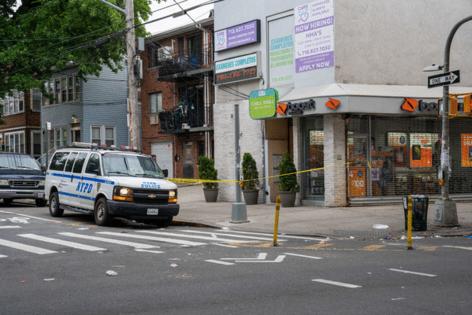 NEW YORK — A spike in shootings and murders in July fueled a 31% increase in the city’s crime rate over the same month last year, the NYPD said Friday, continuing to fuel a hot-button political issue that has the mayor and governor at odds.

The news comes two days after Mayor Eric Adams and the NYPD, in their strongest pushback yet against bail reform, highlighted at a news conference what it called the “worst of the worst” — 10 repeat offenders with nearly 500 arrests among them.

Adams and the police blame the elimination of bail for misdemeanors and certain felonies that went into effect with the criminal justice reform laws in 2020.

The department also pointed out that 716 people have been linked to 30% of the 2,400 shootings in the city since the start of last year, suggesting that far too many have been released without bail in those and other incidents.

At the Wednesday news conference, Adams pushed for more amendments to the reforms, namely allowing judges to consider whether a suspect is likely to reoffend if released with no bail.

But the same day, Gov. Kathy Hochul took a different route, calling out judges and prosecutors for not following the law while Assembly Speaker Carl Heastie, a Bronx Democrat — who has said repeatedly that judges are not setting bail in cases where they have the ability to do so — indicated Adams has not shared with lawmakers the data he claims prove that too many criminals are getting rearrested once freed.

“I’m scratching my head regarding the mayor’s recollection of conversations we’ve had,” Heastie tweeted. “To date, we’ve received no data from the mayor or his team. My most recent exchange with him was about my dismay that he claims to have data that vastly differs from what (the courts) report.”

Through the start of the summer, there had been a continued drop in gun violence.

But that changed in July, with 47 murders, compared with 35 last July, and 178 shooting incidents compared with 157 for the same month last year. Those increases, on top of 469 more robberies and 1,326 more grand larcenies, led to a 31% crime rate increase this July compared with last July.

July’s shooting murder victims include a security guard at a “Law & Order” set in Brooklyn, an 18-year-old allegedly killed by an off-duty city correction officer in the Bronx, and a 14-year-old who was visiting from New Jersey when he was shot in East Harlem.

Despite that, the murder rate, while still up substantially compared with the rate before the pandemic, is down 4% this year, with 253 slayings compared with 264 in the first seven months of last year. Shooting incidents for the year are down 9%, with 816 this year compared with 894 last year.

“Everyone who lives, works and visits here deserves to be safe, and the members of the NYPD will tolerate nothing less,” Police Commissioner Keechant Sewell said Friday. “But we cannot do it alone. When violent criminals are willing to carry illegal guns on our streets and brazenly shoot at innocent people they must face real consequences.”