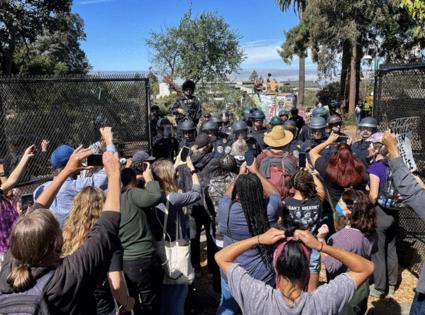 In yet another setback to the University of California, Berkeley's plans to transform historic People's Park into housing for students and the homeless, a state appeals court has issued an injunction temporarily halting construction.

University construction crews — backed by scores of police officers — had moved into the park early Wednesday and began felling trees to commence work on the controversial project, only to retreat hours later in the face of fierce resistance from protesters.

Some park proponents, including Make UC a Good Neighbor and the People's Park Historic District Advocacy Group, also rushed to court, asking for a stay of demolition, which was granted late Thursday.

The order, issued by the California 1st District Court of Appeal, enjoins UC Berkeley from all construction, as well as from further demolition, tree cutting and landscape alteration at the park until a hearing on opponents' environmental challenges can be heard. The university is allowed to keep the park closed off — although the security fence it erected this week will have to be rebuilt because nearly all of it was dismantled by protesters.

The groups argued, among other things, that the university had other options for developing housing besides destroying a park that is also a national historic site, and had not adequately studied them as required by the California Environmental Quality Act. A lower court had ruled against those groups earlier this week, setting the stage for Berkeley's middle-of-the-night rush to construction.

"UC took advantage of the legal system in order to destroy as much of the park as it could," the president of the People's Park Historic District Advocacy Group, Harvey Smith, said in a statement. "We are hopeful that the court will overturn the lower court decision and lead to the restoration of the park. Why should the university keep a parking lot and destroy a park? In the era of extreme climate change this is unconscionable."

But university officials have maintained that in the face of a dire housing shortage they need all the housing sites they can find and said they remain committed to their plans. "We have confidence in the strength of our legal position and will be exploring all feasible options to make up for lost time and open the student housing, as scheduled, in the fall of 2024," officials said in a statement.

UC Berkeley and the city of Berkeley proposed redeveloping the park in 2018, calling it a first-in-the-nation plan to build long-term supportive housing for homeless people on university land. The university also would build 1,100 units of badly needed student housing. The university has vowed to preserve more than 60% of the 2.8 acre space as "revitalized green space" and pledged to include a memorial to the park's historic significance.

People's Park was born in 1969 when the university announced a plan to develop the land, which is about four blocks south of the Berkeley campus just east of Telegraph Avenue.

Outraged by the proposed development, hundreds of people dragged sod, trees and flowers to the empty lot and proclaimed it People's Park. In response, UC erected a fence. The student body president-elect urged a crowd on campus to "take back the park" and more than 6,000 people marched down Telegraph to do just that. A violent clash ensued, leaving one man dead and scores injured.

Although embraced by many Berkeley residents as a city institution, others see it as a blight and unsafe for nearby residents. The park was added to the National Register of Historic Places in May. Although the Berkeley City Council had once opposed development, the current council supports the university's plan.

In preparation for construction, the university, working with the city and nonprofit groups, offered transitional housing to residents of the park for up to a year and a half, as well as meals and social services.

Berkeley City Councilmember Rigel Robinson, a UC Berkeley graduate who now represents the campus and the city's Southside, including People's Park, said that more than 70 residents had moved to the Rodeway Inn in recent months, and many had already received permanent supportive housing.

"This is working," Robinson said in a statement. "People's Park has been a powerful symbol of resistance against government oppression, but it has since become a symbol of something else entirely: our failure as a region to respond to the housing crisis."

"The time has come to turn the page and tackle these challenges head-on," he said. "By immediately sheltering the unhoused community at the park and building the student housing and permanent supportive housing that is so desperately needed in our city, we are doing just that."

(The Times' Stuart Leavenworth contributed to this report from Berkeley.)