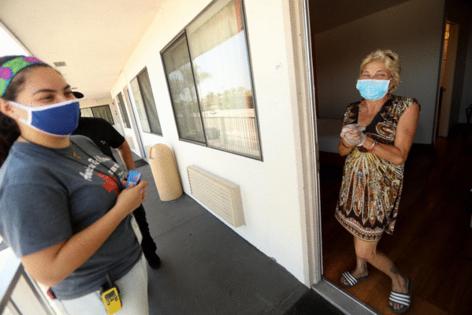 LOS ANGELES — A controversial measure that would require hotels in Los Angeles to provide vacant rooms to homeless people will go before voters in 2024, the City Council decided Friday.

The council rejected an option that would have skipped the public vote and enacted the ordinance directly, instead voting 12-0 to send the measure to the ballot. The initiative is backed by the union Unite Here Local 11, which had already gathered enough signatures to place it on the ballot.

The vote came after a lengthy and animated public comment session, with the majority of speakers opposing direct approval of the measure.

Under the proposal, hotels would be required to regularly report the number of vacant rooms they have to the city's housing department. A program run through the department would then make referrals and pay "fair market rate" for the lodging using prepaid vouchers. Hotels would be prohibited from discriminating against homeless Angelenos "for their participation in this program, or the fact or perception, that they are unhoused."

The proposal comes as city officials are gradually closing one of the signature programs set up to address the homelessness during the COVID-19 pandemic: Project Roomkey, which turned multistory hotels into makeshift shelters.

The proposed program has no designated source of funding and would be contingent on funding being secured by July 1, 2023, according to a report from the city attorney's office.

Because the proposal's backers had gathered enough signatures to get the measure onto the ballot, the council had three options when it came up on Friday: adopt it into law directly, call a special election or place it on the ballot during the next regularly scheduled election. Under election timing rules, that would be the March 5, 2024, primary.

If approved, the proposal would also require new projects with more than 100 rooms or units to obtain a conditional use permit that would take the market demand for hotel and community impacts into consideration.

Many hotel owners and operators spoke vehemently against the proposal, arguing that it would unfairly burden hotels and hurt their ability to do business.