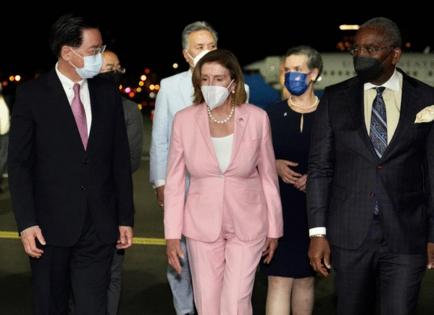 After U.S. House Speaker Nancy Pelosi captivated the world’s attention with a groundbreaking trip to Taiwan, she received far less fanfare on her next stop.

South Korean President Yoon Suk Yeol, who has seen his approval rating drop to near historic depths just three months after taking office, didn’t see it necessary to greet Pelosi in person — opting for a phone call instead.

“President Yoon’s vacation schedule and Speaker Pelosi’s visit to the Republic of Korea overlapped, and we did not rearrange our schedule,” his office said in a statement.

Yoon will likely be the only leader not to meet Pelosi during her high-stakes Asia trip, which included becoming the highest-level US official to visit Taiwan in 25 years, as well as the first sitting House speaker to visit South Korea in about 20 years.

Although Yoon has pledged to rebuild security ties with the country’s long-standing American ally and take a tough line with China, his popularity has swiftly fallen in recent weeks over numerous missteps. Putting off a meeting with one of the most powerful U.S. politicians risks adding to the self-inflicted damage that has dogged his government since it took power in May.

“The optics look very bad,” said Duyeon Kim, an adjunct senior fellow in Seoul at the Center for a New American Security. “It could raise serious questions in Washington about Yoon’s ability to walk the talk about being a self-proclaimed globally pivotal state, a strong team player on Team Democracy, and being able to stand up to China to protect its own national interest.”

Every other South Korean president has met Pelosi since she first became speaker in 2007, and President Roh Moo-hyun met her in 2006 during a visit to Washington. She is the first sitting House speaker to arrive in South Korea since Dennis Hastert in 2002. Pelosi is set to meet Japanese Prime Minister Fumio Kishida on Friday in Tokyo in the final leg on her trip.

During her brief stop in South Korea, Pelosi and her congressional delegation met lawmakers at parliament in Seoul, where they agreed to work to end North Korea’s pursuit of nuclear weapons. The U.S. and South Korea have warned that Kim Jong Un’s regime may soon conduct its first nuclear test since 2017, as he modernizes an arsenal of weapons designed to deliver atomic warheads to the U.S. mainland and its allies in Asia.

Pelosi’s agenda also included a trip to the Panmunjom truce village in the Demilitarized Zone that divides the Koreas. The place where soldiers from the two sides stare down each other is a symbol of military tensions that have simmered since the US came to South Korea’s defense in 1950 after North Korea invaded and started the Korean War.

Yoon Young-chan, a lawmaker for the opposition Democratic Party who served as a press secretary to Yoon’s predecessor, former President Moon Jae-in, said the decision not to meet the U.S. House speaker “may send a wrong message to our ally.”