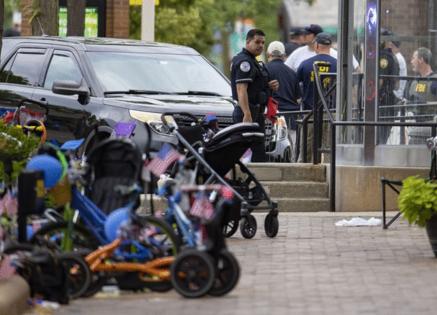 CHICAGO — What haunts longtime Highland Park resident Dana Gordon now are the words of the mother of one of the Uvalde, Texas, school shooting victims.

Just days ago, Gordon helped organize an event in Highland Park dubbed “a community art action against gun violence.” It was prompted by the Uvalde shooting in May, and the names of its 21 victims were read.

Moments after a mass shooting rocked her own hometown Monday, Gordon found herself recalling the words of Kimberly Rubio, the mother of Uvalde victim Lexi Rubio, from her video testimony to Congress: “Somewhere out there, there’s a mom listening to our testimony thinking, ‘I can’t even imagine their pain,’ not knowing that our reality will one day be hers unless we act now.”

“And now here we are,” Gordon said Monday. “Next time we will have to read the names of our own victims.”

That members of the Highland Park community had gathered to mourn victims of another American massacre not 10 days before someone opened fired during the local Fourth of July parade was a horrific coincidence. Yet Highland Park has had a prominent history of gun rights activism and controversy.

An affluent suburb abutting Lake Michigan with a large Jewish population and predominantly liberal politics, Highland Park leaders enacted a ban on assault rifles in 2013 that was swiftly challenged by a local doctor and the Illinois Rifle Association.

That legal fight was appealed all the way to the U.S. Supreme Court, which declined to hear the case, allowing a lower court ruling in favor of the ban to stand.

“A ban on assault weapons and large‐capacity magazines might not prevent shootings in Highland Park (where they are already rare), but it may reduce the carnage if a mass shooting occurs,” the appeals court wrote.

But while the High Court took a pass on the case in 2015, Supreme Court Justices Clarence Thomas and Antonin Scalia wrote a dissenting opinion saying they would have heard the case and that the appeals court “flouts two of our Second Amendment precedents.”

Just this year, the current iteration of the Supreme Court made a ruling that limited the way states could restrict concealed carry of guns outside the home; the ruling led legal observers to speculate that it would be harder for lower courts to uphold local regulations on assault weapons and high-capacity magazines.

Gordon, one of the organizers of last month’s art in action event in Highland Park, advocated for the assault rifle ban. More recently, after Illinois’ concealed carry law went into effect, she was among local gun control advocates who went door to door to local businesses, lobbying them to post signs saying concealed carriers were not welcome.

At the June 25 event in front of The Art Center in Highland Park, members of Moms Demand Action participated, as did some of the politicians who were present at the parade when the gunshots rang out, including Mayor Nancy Rotering and U.S. Rep. Brad Schneider. An installation by local artist Jacqueline von Edelberg was also set up and remained on display in front of the art center Monday. The work features tens of thousands of pieces of orange fabric, each to symbolize children dead from gun violence, the color reportedly in honor of Hadiya Pendleton, the Chicago teen whose 2013 shooting death inspired an annual “Wear Orange Day.”

Now Gordon, who said she knows at least two of the people who were shot in Highland Park on Monday, recalls the warning of Uvalde mother Kimberly Rubio.