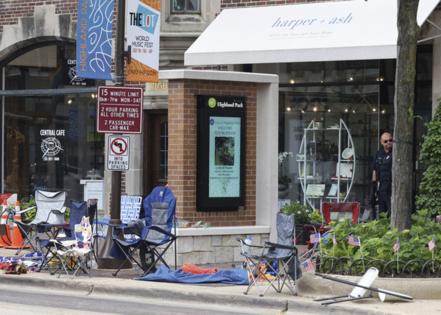 With the shooting in Highland Park, Illinois, on the nation’s 246th birthday, the U.S. had marked its 309th mass shooting this year, according to a nonprofit that tracks gunfire incidents.

To date this year, there have been on average 11 mass shootings per week, the nonprofit Gun Violence Archive’s data show. The group classifies an incident as a mass shooting when four or more people, excluding the shooter, are shot or killed.

At least six people were killed and 30 or more wounded Monday when a gunman rained bullets down upon an Independence Day parade in an affluent suburb about 25 miles north of downtown Chicago. The gunman, who as of Monday afternoon was still at large, found his way to a rooftop to wreak his havoc as hundreds of people, including parents with strollers and kids on bikes, fled the scene.

On Monday evening, police identified 22-year-old area resident Robert Crimo III as a person of interest. He was driving a silver 2010 Honda Fit, and cops said he should be considered armed and dangerous.