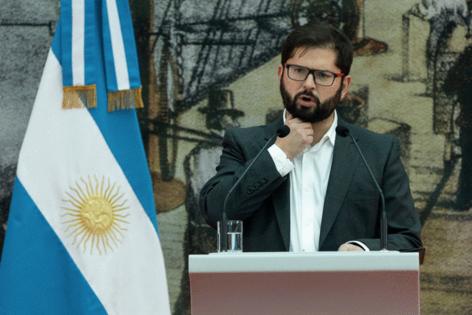 Chile’s Constitutional Convention presented the final version of the charter that will be put to a referendum as a growing number of voters question the broad changes it would enact from social rights to political rules.

The institution’s leadership handed the draft to President Gabriel Boric at a closing ceremony on Monday in Santiago. On Sept. 4, Chileans will decide whether to approve the new magna carta or stick with the current document implemented during the 1973-1990 military dictatorship.

The ceremony caps a year of debate and votes in a process sparked by Chile’s biggest social upheaval in a generation. If approved, the document would mark a shift away from market-friendly rules by strengthening workers’ rights, boosting environmental protection, overhauling water ownership and giving indigenous groups a bigger say in investment projects. Polls suggest the changes may have gone too far, with more voters inclined to reject the draft.

“The perfect constitution doesn’t exist, and this isn’t the exception,” said Gaspar Dominguez, the convention’s vice president. “This draft constitution isn’t a magic wand that will solve our problems, but rather it’s a better toolbox that we can use to advance with solutions.”

September’s vote will also be key for Boric’s administration, which would have an easier path to implement its policy proposals if the current constitution is replaced. Boric has expressed his support for the convention, while also saying that both the options of approving or rejecting the draft are legitimate.

The percentage of voters intending to reject the draft surged to 51% from 33% in January, according to the latest survey from pollster Cadem. Support for the “approve” option has fallen to 34% from 56% in the same period.

Some of the draft’s most controversial proposals include articles that replace the senate with a regional chamber and create a parallel justice system for indigenous groups. The charter also incorporates new considerations into central bank policy making and protects glaciers from mining.

“We have had to write this text in the midst of social tensions and an unprecedented social-environmental crisis during a pandemic and while new wars happen in the world,” said Maria Elisa Quinteros, the convention’s president.