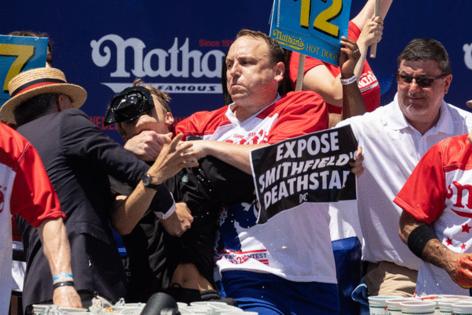 The protester sporting a Darth Vader mask interrupted Chestnut as he devoured 63 hot dogs and buns in 10 minutes. The stunt likely preventing the gutsy athlete from approaching his own world record, set last year, of 76 wieners devoured.

Video captured the activist shove the champ aside as he forced hot dogs down his gullet. The activist showed a sign to the cameras reading “Expose Smithfield’s Deathstar” — a reference to Nathan’s supplier Smithfield Foods, according to protest sponsor Direct Action Everywhere.

Chestnut grabbed the activist around the neck in a wrestling-style takedown while George Shea, the straw-hat wearing event host, helped tackle him to the ground.

Chestnut then returned to his meal.

“It was a crazy contest,” Chestnut said after conquering Coney Island’s iconic July 4 event yet again. “I’m happy I was able to come through on top. New York is amazing. There’s no place like it in the world.”

The NYPD confirmed that three people were taken into custody in connection with the protest and that charges were pending.

With the beach crowd chanting his name — “Jo-ey, Jo-ey, Jo-ey” — Chestnut beat the second-place finisher by a full 20 hot dogs.

Chestnut walked into the pre-food fest weigh-in on crutches, saying he ruptured a tendon in his right leg.

“I feel better then I look,” he said.