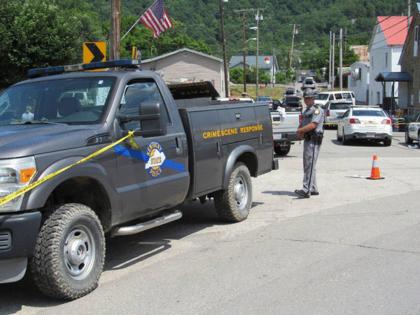 On Thursday at 6:30 p.m., Lance Storz, 49, of Allen, allegedly opened fire with a high-powered rifle on Floyd County sheriff’s deputies attempting to serve an emergency protective order, according to local officials.

The emergency management director had to have surgery on his eye and it’s reported that he will lose his left eye, officials said. Another deputy is also expected to have numerous surgeries on his eye.

The three deputies are reported to be in good spirits but are still recovering from injuries, officials said. One deputy was shot in the leg, and it’s unclear what the result of his injuries will be. Constable Gary Wolfe was shot and sustained multiple facial and eye injuries.

Storz has been charged with two counts of murdering a police officer, five counts of attempting to murder a police officer, one additional count of attempted murder and one count of assaulting a service animal, according to court records. He’s been held in jail on a $10 million bond and is scheduled for his next court appearance on July 11.

“These officers did not know they were walking into a tactical ambush and the shooting had a field of fire of over 200 yards,” Williams said. “There was one single-lane road leading into his home and the home was in an elevated position. This created a nearly unbreachable position.

“The officers performed valiantly, and did everything in their power to neutralize the suspect and attempt a surrender. Upon surrender, the reality and magnitude of what just occurred began to sink in and our community was going to be forever changed.”

Floyd County Sheriff John Hunt said around 2:30 p.m. on Thursday, June 30, his office received a phone call from someone who alleged that Storz was holding a woman against her will and abusing her.