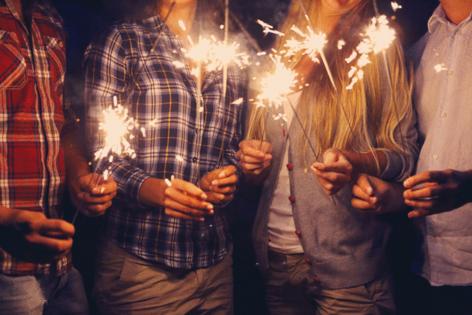 James Reingold doesn’t want to snuff out anyone’s flame, but after too many summers treating emergency department patients at St. Christopher’s Hospital for Children, he has a special Independence Day message: For the love of whatever you hold dear, don’t give your kids sparklers.

Fireworks injuries have gone up 25% over the last 15 years, with children and young adults most likely to be hurt, according to new data released by the U.S. Consumer Product Safety Commission. Fireworks imports rose 50% during the same 2005-21 period, to 416 million pounds.

Sparklers can be especially dangerous because they are intended to be held — rather than admired from a distance — and are often marketed to children, Reingold said. They accounted for 63% of fireworks injuries among children under age 5.

“Little kids love to run around with sparklers,” said Reingold, who is the medical director of St. Chris’ emergency department. “But it’s very much not a safe thing to hand them.”

Although a single stray spark is unlikely to hurt you, sparklers burn 1,800-3,000 degrees Fahrenheit, which is hot enough to cause a third-degree burn, Reingold said.

Third-degree burns are the most severe type of burn and can be life-threatening if untreated. This type of burn damages the top layer of skin and the layer underneath, which means new skin will not grow, according to Children’s Hospital of Philadelphia.

There were 11,500 fireworks injuries treated at emergency departments and nine deaths in 2021, according to the safety commission report. Three-quarters of those injuries — about 8,500 injuries — occurred in the weeks around the Fourth of July, from June 18 through July 18, researchers found.

Reingold said that St. Chris’ sees more fireworks injuries in the summer, in general, but that cases peak around Independence Day.

According to the safety commission report, young adults ages 20 to 24 had the highest rate of fireworks injuries treated at a hospital, followed by children ages 5 to 9, during the commission’s special study period, June 18 to July 18. Children under 15 accounted for just under a third of all cases in 2021.

Burns are the most common type of fireworks injury, primarily on hands and arms, Reingold said. Fireworks can scorch skin on contact, or cause clothing to catch fire and result in burns.

Less common but extremely concerning, Reingold said, are eye injuries due to fireworks — for instance, if a spark gets in the eye.

“It’s a combination of all the worst things for your eyes: heat, projectile, chemical,” he said.

Families with infants and toddlers, who are more sensitive to loud noises because their ear canals are smaller, should be especially careful to keep at least 500 feet away from fireworks, Reingold said.

“It’s not really what you think of when you think about fireworks safety,” Reingold said, but some fireworks can explode at 150 decibels, which can cause some degree of hearing loss if you’re close enough.

Professional fireworks displays are a safer alternative to backyard shows, he said.

Some other tips from CHOP for staying safe:

— Know what types of fireworks are legal where you live.

— Have an outdoor hose or bucket of water on hand in case of a fire. Douse used fireworks thoroughly before throwing them away.

— Choose a dry, flat surface to light fireworks one at a time.

— Don’t try to relight fireworks that haven’t gone off.