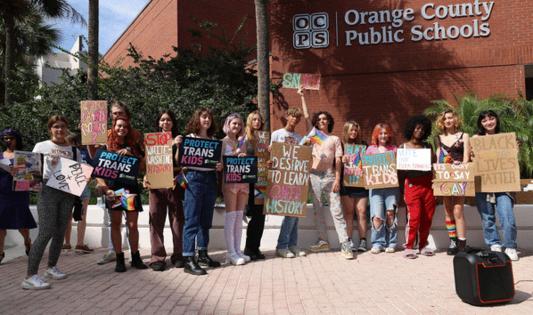 ORLANDO, Fla. — The new Florida law dubbed “don’t say gay” by its critics kicked in Friday, banning instruction on sexual orientation and gender identity in primary grades — and creating fears that all topics related to LGBTQ people are off limits in public schools.

State leaders dismiss those complaints, saying the law, officially known as the Parental Rights in Education act, or HB 1557, has been the subject of “fear mongering” and does not attack gay or transgender students, employees or parents.

The law’s goal is to limit instruction on those topics in the earliest grades, leaving that up to parents, and to make sure such lessons are “age appropriate” in older grades.

But an Orange County Public Schools workshop on the new law held last month — one that district attorneys admitted “caused more confusion than clarity” — showcased the worries many educators have about the new legislation.

“It’s basically making something against the law that was already not a thing,” said Gretchen Robinson, a veteran high school teacher in Orange County, who is confident elementary school colleagues never provided lessons on sexual orientation or gender identity.

In her view, the law’s real goal is clear: “Hostile signaling against the LGBTQ community.”

The Biden administration agreed, criticizing Florida’s measure as “shameful” and homophobic in a statement Friday.

“Today, some of Florida’s most vulnerable students and families are more fearful and less free,” said the statement from White House press secretary Karine Jean-Pierre.

“The Department of Education will be monitoring this law, and any student or parent who believes they are experiencing discrimination is encouraged to file a complaint with the Department’s Office for Civil Rights,” she said.

The OCPS workshops, held last month, aimed to update 600 principals and assistant principals about new laws affecting campuses. At these “camp legal” meetings there was a lot of interest in HB 1557 and a lot of questions posed to the district’s legal staff.

He finds himself second-guessing how close people are getting to him at bars or music venues. He ...Read More

BELFAST, Tenn. — Three years ago, Mason Lester, a rambunctious toddler, tumbled off his family’s porch and broke his wrist. His mother, nine months pregnant, rushed him to a nearby hospital, where she made a ...Read More

In 2014, the Great Falls, Montana, man was charged with assaulting two detention officers while he was in jail, ...Read More