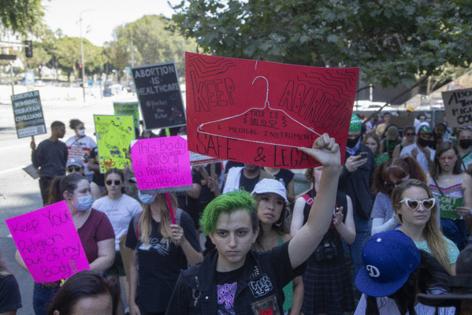 LOS ANGELES — Hundreds of people marched through downtown Los Angeles on Saturday to protest for abortion rights, the second weekend in a row that Californians have taken to the streets after the U.S. Supreme Court overturned Roe vs. Wade.

At a rally outside the federal courthouse on 1st Street, speakers urged a crowd of about 200 people to march peacefully to show their anger and frustration over the rollback of federal abortion rights after 49 years.

The crowd marched down Broadway toward Pershing Square, chanting, “We won’t go back!” and “Controlling women is what they want; furious women is what they got.” Some protesters held signs that read, “Keep your hands off my body” and “Post Roe? Hell no.”

The protest was organized by the Southern California chapter of Rise Up 4 Abortion Rights, which also helped coordinate a march in the Belmont Shore area of Long Beach. The group is also calling for a “national day of action” on July 4 that will include a protest in Venice Beach.

“Standing in the middle ground or simply being pro-choice is not good enough anymore,” one speaker told the crowd. “We need to stand up for women in other states … for people in abusive relationships, who may not want to have a child with their abuser or their rapist.”

Many protesters wore green bandannas around their heads, necks and arms. Green has become the international color of abortion rights, inspired by the “green wave” movement that led to the legalization of abortion in several Latin American countries.

Rise Up 4 Abortion Rights volunteer Daniela Estevez, 21, of Pasadena, said she is working to collect letters from women in Mexico, Chile and Argentina who can encourage and advise Americans as they fight to improve access to abortion.

“They know what it’s like to live in a country where abortion at the federal level is not legal,” Estevez said. The goal, she said, is to “build international solidarity.”

Estevez carried a cardboard sign that bore the words “Que tiemble el estado,” or “Let the state tremble,” the opening lyrics of a folk song that became an anthem for Latin American women protesting femicide and abortion restrictions.

The protesters paused on Broadway outside Grand Central Market, and people eating tacos and ice cream at sidewalk tables looked on as an organizer yelled into a bullhorn, “Make some noise for abortion rights!”

A few diners joined in, clapping and whistling. Others held up their phones to record video.

Sarah Ramos, still holding an agua fresca, stood up from her table and joined the march with two friends. They had come from Palms for lunch and hadn’t known the protest was happening, she said, or they would have stayed longer and brought signs. The protest felt appropriate for this Fourth of July weekend, she said.

“It’s hard to think about celebrating this country when I’m so frustrated right now,” Ramos said. “Our mothers literally had more rights when they were our age.”