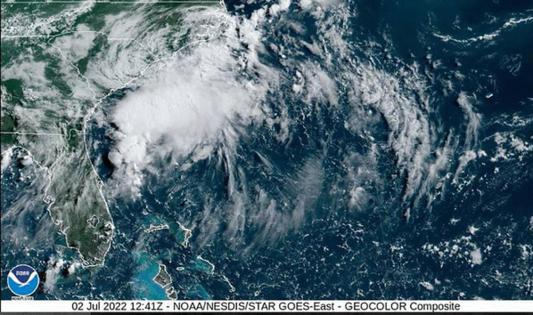 RALEIGH, N.C. — Tropical Storm Colin kept most of its winds and rains offshore as it worked its way up the North Carolina coast on Saturday, but weather authorities warned residents and visitors to be on the lookout for severe weather again Sunday.

The tropical storm, which spun up overnight in the Atlantic Ocean near South Carolina, left behind rough surf and life-threatening riptides, an unwelcome surprise for beachgoers amid the July 4 holiday weekend.

The center of the storm was near the border between the Carolinas at 5 p.m. Saturday, according to the National Hurricane Center.

Winds around 40 mph were recorded, though Colin was losing organization as it chugged northeast at 7 mph. The storm was expected to cruise along North Carolina’s beaches before moving into the Atlantic Ocean around midday Sunday and dissipating by Monday morning.

Up to 4 inches of rain were possible in some areas, prompting flood cautions.

Warnings of rip currents and dangerous surf are in effect from Cape Fear to Duck.

“This storm that formed quickly and rather unexpectedly is a reminder that we all need to be prepared and vigilant during hurricane season,” Gov. Roy Cooper said in a statement Saturday. “If you are enjoying the holiday weekend at the coast, keep a close eye on the weather and be sure to follow directions from local officials and lifeguards.”

The Triangle won’t feel much of the storm, though some inland counties in the eastern part of the state may be at risk of flooding.

The strongest winds typically stay on the east side of a tropical system, the NWS explained, shielding the Triangle from the worst of the gusts.