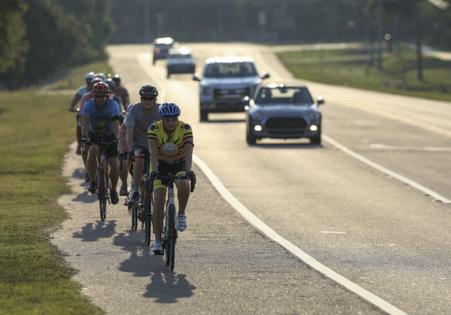 The crash occurred in October, in a Pinellas Park neighborhood with a 35-mph speed limit. After impact, the car hit a street sign and plowed into a church.

Police found Patino Riley and the motorcycle driver lying on the road with traumatic injuries. Patino Riley, 34, was taken to the hospital, where she was pronounced dead.

Patino Riley’s death left her four children — now 3, 9, 10 and 12 years old — without a mother. Making it worse: Their father, Lance Riley, had been killed in a bicycle crash just five months earlier.

“You just don’t have the answers for when something like that happens, to the children especially,” said Riley’s cousin, Wynter Breeden. “You just don’t even know what to say to them.”

The couple were two of nearly 43,000 people killed on a U.S. road in 2021 — the most in 16 years, according to estimates from the National Highway Traffic Safety Administration. The 10.5% jump in deaths over 2020 is the largest annual percentage increase since the government began keeping track in 1975.

As alarming as the national surge was, the spike was even greater in Florida — and far bigger in some Tampa Bay area counties, including Hillsborough and Pinellas.

Florida traffic deaths jumped by nearly 13% to 3,753 fatalities. In Hillsborough, the increase was 28% to 273 people killed, according to statistics from Signal Four Analytics, a tool that uses data from law enforcement. In Pinellas, there was a startling 48% surge to 160 deaths on roads.

Experts blame a number of factors, including the number of miles people drove in 2021, which was 11% higher than the prior year. In fact, the number of people killed per 100 million miles traveled was about the same for both years.

But experts say there’s more to the story. Gena Torres, assistant director of the Hillsborough Transportation Planning Organization, said her agency dug into local data and found new traffic patterns because of the pandemic were a major factor in the spike in deaths.