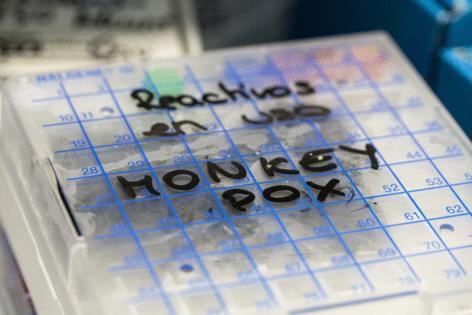 “There’s been some what we call ‘community transmission.’ That is, it’s not from travelers or people who went elsewhere and contracted monkeypox somewhere else. It’s actually they got monkeypox here in L.A. County, because it was transmitted from someone else here in L.A. County who had monkeypox,” Public Health Director Barbara Ferrer said at this week’s Board of Supervisors meeting.

Overall, there were 30 presumptive or confirmed monkeypox cases in L.A. County as of Thursday. No one in the county had been hospitalized or died from the disease as of last week.

Meanwhile, the geographic impact of the monkeypox outbreak continues to expand.

Here’s what you need to know about the disease and its spread:

Where is monkeypox spreading in L.A. County?

“The majority of people who have been diagnosed here in L.A. County with monkeypox have been folks who attended two very big parties,” Ferrer said this week. “So we’ve done a lot of very specific outreach to the attendees at these events.”

Among humans, monkeypox can be transmitted through sustained skin-to-skin contact with someone who has an active rash. In some cases in the current outbreak, during the early stages of illness, the rash has been found in the genital area and in or around the anus.

Health officials have observed that some recent cases have been among men who have sex with men.