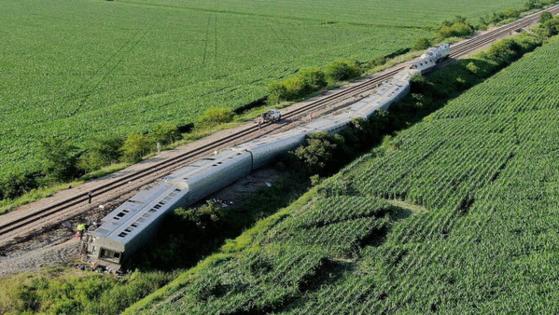 KANSAS CITY, Mo. — Passenger rail provider Amtrak and BNSF Railway Company have filed a federal lawsuit blaming the contracting company that owns the dump truck the train collided with on Monday of causing the crash that killed four people, including the truck driver, near Mendon, Missouri.

The lawsuit, filed Thursday in the Eastern District of Missouri, alleges MS Contracting, based in Brookfield, Missouri, is ultimately responsible for the crash, saying truck driver Billy Barton II crossed the railroad tracks in a manner that was “unsafe, careless and reckless.” It further alleges the company failed to properly maintain its trucking equipment or properly train its employees, including Barton.

A call placed to the contracting company’s listed phone number was not answered Thursday. Lawyers representing Amtrak and BNSF did not immediately reply to a message from The Star seeking comment.

Also on Thursday, a lawsuit was filed against a BNSF manager and Chariton County by Barton’s widow. It alleges the intersection was dangerous because it lacks visibility for drivers and does not have a sufficient warning system.

The deadly crash occurred around 12:45 p.m. Monday at the railroad crossing on Porche Prairie Avenue after the Los Angeles-Chicago bound train, running along the Southwest Chief route, hit a dump truck that was obstructing the track, authorities have said. The truck was hauling a load of shot rock to a nearby levee under repair by the U.S. Army Corps of Engineers.

Approximately 275 passengers and 12 crew members were on board at the time. The collision caused several train cars to fall over, leading to a crisis situation in the rural Missouri town as at least 150 were transported to 10 different hospitals across the state.

Three passengers were killed, identified by authorities as Rachelle Cook, 58, and Kim Holsapple, 56, both of De Soto, Kansas; and Binh Pham, 82, of Kansas City. More than a dozen remained hospitalized as of Wednesday.

In the days since the crash, The Star has learned of public safety concerns that were raised in recent years about the railroad crossing, which has no lights or guard rails. Other concerns include visibility and the steep grade of the public road that intersects with the railroad tracks.

The Missouri Department of Transportation has authority over public railroad crossings and runs the state’s railroad safety program.

The Porche Prairie crossing was on a list of MoDOT’s recommended safety projects that had yet to be completed. Its estimated cost was $400,000.

The National Transportation Safety Board, the federal agency that investigates railway and other transportation disasters, has yet to complete its analysis of the crash. Officials say the Amtrak train was going 89 mph when the train blew its horn, roughly one-quarter mile before impact, and slowed to 87 mph at the moment of impact.

Data from the train’s cameras and computer systems have been collected as part of the investigation. NTSB officials also say they are taking into account the safety concerns that have been raised about the crossing.

The agency is expected to release a report in mid-July containing basic facts about the incident.

Meantime, the lawsuit filed Thursday on behalf of Amtrak and BNSF contends the train was “clearly visible” and that Barton, the driver, failed to yield to the train’s right of way. It was not immediately clear what led the companies to arrive at that conclusion.

The lawsuit is among the first in a potential wave of civil cases as some passengers have signaled they may sue Amtrak and the railway company. Several have already retained legal counsel.