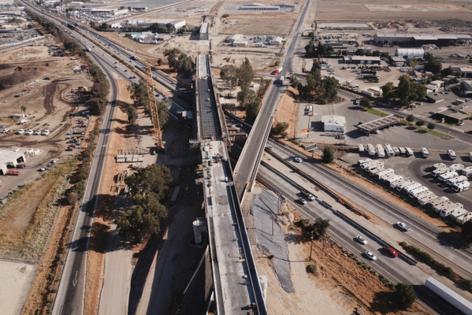 After wrangling over the future of California’s high-speed rail, state lawmakers plan to release a critical batch of money to finish a bullet train in the Central Valley, while also establishing an inspector general to audit the beleaguered project and authorizing billions of dollars in new money for rail plans across the state.

The agreement, included in a budget trailer bill that passed the Assembly Wednesday night, ends a year-plus deadlock in Sacramento on how to spend the last chunk of $4.2 billion in bond funds for high-speed rail, which voters approved in 2008.

California’s unprecedented $97.5 billion budget surplus allowed the state to do both. The budget nearly solidifies the 171-mile Central Valley link – now projected to see a bullet train around 2030.

It also increases state funding for rail plans to $3.65 billion this year, which could potentially send money to financially strapped Bay Area projects like Caltrain electrification and BART to downtown San Jose.

Another $4 billion is planned for transit infrastructure through 2025, although that money has yet to be allocated.

“We released the $4.2 billion, but we also got $3.65 billion in this year’s budget as a result of the compromise,” Assembly Speaker Anthony Rendon, a leading critic of the Central Valley segment, said in an interview.

As part of the agreement, lawmakers established an independent inspector general’s office with wide-ranging powers to audit the California High-Speed Rail Authority, which has seen its cost estimates explode in recent years. The inspector general will be appointed by the governor from a shortlist of candidates selected by a legislative committee.

Still, the squabble over high-speed rail during a record budget surplus does not bode well for the prospects of a bullet train whizzing from San Francisco to Los Angeles within the coming decades, said Ethan Elkind, director of the climate program at the UC Berkeley School of Law.