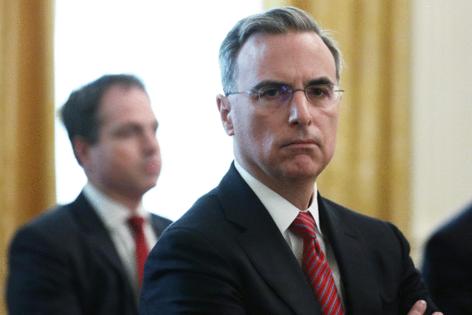 The House Committee investigating last year’s assault on the U.S. Capitol said Wednesday it had subpoenaed former White House Counsel Pat Cipollone to appear on July 6 for a closed-door deposition.

“The Select Committee’s investigation has revealed evidence that Mr. Cipollone repeatedly raised legal and other concerns about President Trump’s activities on Jan. 6th and in the days that preceded,” said Committee Chairman Bennie Thompson in a statement.

Thompson wrote that Cipollone has informally engaged with the committee, but that “the committee needs to hear from him on the record, as other former White House counsels have done in other congressional investigations.”

Cipollone has emerged in recent weeks as a subject of interest by committee members who say he was at the center of a number of events related to the attack on Jan. 6, 2021 and then-President Donald Trump’s activities.

Any concerns Cipollone has about “institutional interests or his prior office are outweighed by the need for his testimony,” she wrote.

In her testimony Wednesday, Hutchinson recalled that Cipollone raised concerns about the legal ramifications if then-President Donald Trump were to go with the mob of his supporters to the Capitol after his rally that day.

“We’re going to get charges of every crime imaginable if we make that move,” Hutchinson quoted him saying at the time.

Cipollone didn’t immediately reply to an email message sent to him seeking comment on the subpoena.

In a letter to Cipollone, Thompson cited a number of areas of interest the committee wants to address with Cipollone including “President Trump’s awareness of and involvement in activities to subvert the outcome of the 2020 presidential election.”

Thompson also cited “the submission of fake electoral ballots to Congress and the executive branch, the attempted appointment of Jeffrey Clark as attorney general, and efforts to interfere with the Congressional certification of the electoral results on Jan. 6, 2021.”

He said that the attorney had sat for an “an informal interview” with the committee on April 13 but that he has refused to cooperate further, leading to the need for a subpoena.