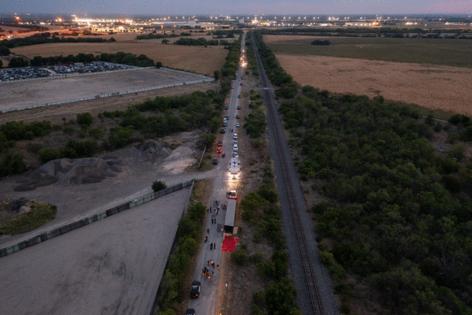 SAN ANTONIO — The alleged driver of a truck packed with migrants who died in the sweltering Texas heat this week initially tried to pass himself off as a victim to evade authorities and may have been under the influence of narcotics during the smuggling attempt.

Those are among the details to emerge Wednesday about a man authorities say is a central figure in one of the deadliest human-trafficking incidents in U.S. history. With the deaths of two more migrants, the total number of fatalities climbed to 53.

A U.S. official and a Mexican official identified the driver as 45-year-old Homero Zamorano, a U.S. citizen who was detained Monday in a field near where the tractor-trailer was discovered in an industrial zone of San Antonio.

Zamorano was arrested by San Antonio police and later hospitalized for unspecified medical treatment, according to the U.S. official, who said the suspect at first pretended to be a migrant and appeared to be under the influence of narcotics.

Zamorano had not been charged with a crime as of Wednesday afternoon. He is one of three men arrested in connection to the tragedy.

Two Mexican nationals in the U.S. illegally — Juan Francisco D’Luna-Bilbao and Juan Claudio D’Luna-Mendez — were charged with illegal possession of firearms after police traced the truck’s registration to a San Antonio address and then surveilled the house, according to criminal complaints filed against them Tuesday.

The trailer was discovered Monday evening near a stretch of railroad tracks after a worker heard a cry for help. First responders discovered 46 migrants dead in the truck. Seven others died later.

Officials said there was no sign of water or working air-conditioning in the vehicle, even as temperatures in San Antonio on Monday hovered around 100 degrees.

Smugglers frequently ferry migrants who have already crossed the border on foot north in car trunks or tractor-trailers to avoid detection at the ubiquitous migrant checkpoints in southern Texas.

Mexican officials and U.S. Rep. Henry Cuellar, D-Texas, said the truck passed through a Border Patrol checkpoint northeast of Laredo on Interstate 35 on Monday. The truck’s passage was captured by security cameras.