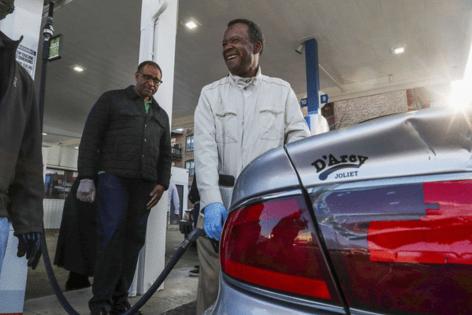 He gave out $80,000 in groceries at four Chicago Cermak Fresh Markets on Wednesday and plans to give nearly $2 million in gas on July 9. He has given away $3.2 million in gas and food since March.

“People need a break from all these high costs,” Wilson said.

The locations for Wilson’s planned gas giveaway can be found on his Facebook page. Drivers will be able to get a full tank of gas, he said when he announced the plan.

Spiking gas prices have made it hard for people to get to work and bring kids to day care, the mayoral hopeful said.

“People are suffering and a lot of people don’t have food to eat,” Wilson told the Chicago Tribune. He encouraged restaurants that throw away cooked food to find ways to donate it. The businessman and perennial candidate also called on wealthy Chicagoans and local businesses to find ways to support people with now heightened needs.

The giveaway will provide relief for some shoppers and motorists across Chicago, but critics have alleged that Wilson’s handouts to potential voters raise ethical questions.

Wilson, who estimates he’s given away $40 million in charity over his career, said “there’s no place for politicking” with his donations. He’s made them regularly in and outside Chicago and will continue to, he said.

“I think the critics should stop criticizing and get out here and do something,” he said.