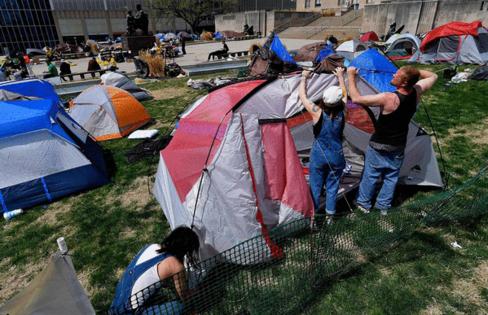 Some Kansas City leaders working to address homelessness have expressed concern that the law could criminalize some of the estimated 2,000 people living without housing in Kansas City and cut funding from programs working to remedy it.

Starting next year, after receiving a warning, homeless individuals sleeping on state land could face a class C misdemeanor.

Sgt. Jake Becchina, a Kansas City police spokesman, said upon the bill’s signing, the department will talk with state and local partners and prosecutors “to ensure the best response in any possible situation for when the law takes effect.”

Rep. Bruce Degroot, a Chesterfield Republican, added the language regarding homelessness as an amendment to a bill requiring local governments to publish salary information of elected officials. While it passed both chambers of the Missouri legislature in late May, some lawmakers voiced concern about whether arresting those who are unhoused is inhumane.

At a bill signing ceremony in Jefferson City on Wednesday, Degroot said the law relocates some homeless individuals “to locations where they can safely get the help they need.”

Sarah Owsley, with Empower Missouri, which calls itself the oldest and largest anti-poverty nonprofit in the state, said issuing warnings hasn’t proven to deter homelessness in other places.

Street sleeping bans also increase the likelihood that unsheltered individuals move deeper into the woods or to more secluded areas that can present more dangerous situations for them, she said.

He finds himself second-guessing how close people are getting to him at bars or music venues. He ...Read More

BELFAST, Tenn. — Three years ago, Mason Lester, a rambunctious toddler, tumbled off his family’s porch and broke his wrist. His mother, nine months pregnant, rushed him to a nearby hospital, where she made a ...Read More

In 2014, the Great Falls, Montana, man was charged with assaulting two detention officers while he was in jail, ...Read More