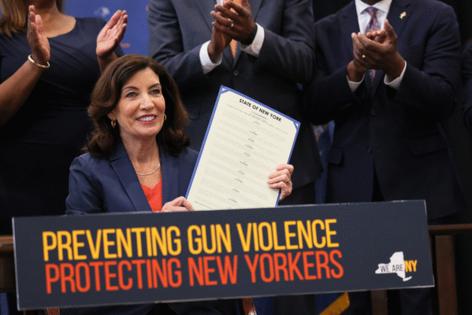 ALBANY, N.Y. — New York gun owners will be barred from carrying firearms in a wide array of “sensitive locations,” and businesses must explicitly allow armed patrons under an agreement reached Wednesday between lawmakers and Gov. Kathy Hochul.

The deal — which will bar guns from being brought into government buildings, schools, subways and buses, medical facilities and more — comes less than a week after the U.S. Supreme Court struck down a state law that limited the carrying of concealed weapons.

“We’re going to continue to make sure we toughen those laws,” Hochul, a Democrat, said following a meeting of the Interstate Task Force on Illegal Guns in upstate East Greenbush. “This is not the Wild West. This is New York State.”

The Democratic-led Legislature is scheduled to reconvene Thursday for a special session to approve the measures, which will also strengthen background checks and add 15 hours of in-person training to the requirements needed for a concealed-carry permit.

“We look forward to being back in Albany tomorrow,” Senate Majority Leader Andrea Stewart-Cousins, D-Yonkers, said. “As I have said over and over again states must be the front line of defense. We are ready to take action.”

Democrats, who control both the Senate and Assembly, were slated to meet Wednesday evening to discuss the changes.

Hochul said background checks will also be necessary to purchase ammunition for guns that need a permit, such as handguns and semi-automatic rifles.

“We’re going to make sure we have the strongest protections possible,” she said.

Business owners will have to explicitly state that they allow concealed weapons on their property, most likely with a sign indicating that gun-toting patrons are welcome.

The governor called lawmakers back to Albany to address the issue after the Supreme Court last week determined in a 6-3 ruling that a 100-year-old New York law requiring those applying for a license to show “proper cause” to carry a gun violated the Constitution.