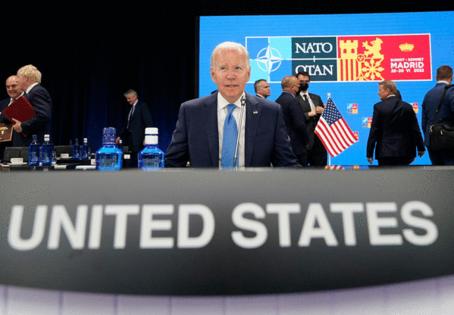 MADRID — Reflecting NATO’s determination to strengthen its defenses amid Russia’s war in Ukraine, President Joe Biden announced Wednesday that the U.S. would commit more troops to Europe as the transatlantic alliance formally invited Finland and Sweden to become members.

“NATO is strong and united,” Biden said during a meeting with Jens Stoltenberg, the secretary general of the North Atlantic Treaty Organization, on the first full day of a summit here. “And the steps we’re taking during this summit, we’re going to further augment our collective strength.”

Biden emphasized that the alliance was committed to defending “every inch” of territory under its charter’s “sacrosanct” Article V, which deems an attack on a member nation to be an attack against all.

That protective umbrella is expected to cover Sweden and Finland in a historic expansion of the alliance after Turkey on Tuesday dropped its objections to the two countries joining. Once every member nation’s parliament has ratified the expansion, which is expected to take several months, NATO’s territory will include Finland’s 810-mile border with Russia — more evidence, Biden said, that invading Ukraine has backfired on Russian President Vladimir Putin.

“Putin was looking for the Finland-ization of Europe,” Biden said, referring to Helsinki’s decades-long embrace of nonalignment for fear of angering Moscow.

But the war in Ukraine is leading to “the NATO-ization of Europe,” Biden said. “And that’s exactly what he didn’t want — but exactly what needs to be done to guarantee security for Europe.”

Putin, who has given several justifications for invading Ukraine, initially cited Ukraine’s own desire to join NATO as a pretext for his Feb. 24 invasion.

Russian missile strikes on civilian targets in Ukraine this week as G-7 and NATO leaders gather in Europe have sent a menacing signal to the West, crystallizing anew the importance and urgency of strengthening NATO forces in the face of Russian aggression.

Outlining the additional U.S. commitments in Europe, Biden said the U.S. would establish a new army headquarters in Poland — the first permanent American installation on NATO’s eastern flank — and put a rotational brigade combat team of 3,000 troops in Romania to enable swift deployments in the region.

Celeste Wallander, an assistant U.S. defense secretary for international affairs, told reporters that a permanent U.S. presence in Poland would help ensure that NATO’s forces are better equipped to respond quickly when necessary.