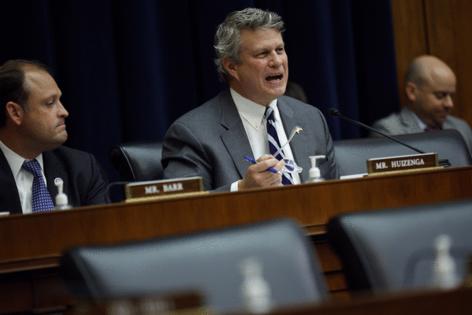 WASHINGTON — Being a real estate agent in the mid-1990s meant you probably had a cellphone, even if none of your friends did.

“I had mine hardwired into my car,” says Rep. Bill Huizenga, a Michigan Republican.

That came in handy when he took a new job as a congressional staffer, though it did raise some eyebrows. “Why was my cellphone bill so big?” Huizenga recalls his fellow staffers asking.

He liked to roam the district as he worked for Pete Hoekstra, who represented a long stretch of Lake Michigan’s western shore.

“It was such a different way than they operated in D.C., where you were tied to your desk,” says Huizenga, who eventually went on to replace his former boss in Congress.

A lot has changed, but Huizenga still draws on his time as a district staffer. He sat down with CQ Roll Call this spring to talk about his memories of working for Hoekstra, who most recently served as ambassador to the Netherlands during Donald Trump’s presidency.

Q: How did you start working for Hoekstra?

A: In the spring of 1991, I interned for the Republican Study Committee, so that was my first exposure on the Hill. This was right at the end of the first Gulf War, and I got to help organize the national victory parade in D.C.

And then I went back home, graduated, got into real estate as a profession. Being an independent contractor meant I had a very flexible schedule — so I was a well-used volunteer by Hoekstra’s campaign.