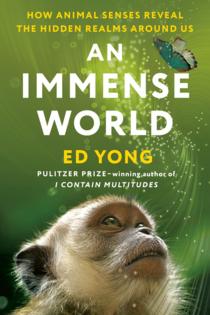 "An Immense World: How Animal Senses Reveal the World Around Us" by Ed Yong; Random House (464 pages, $30)

Six years ago, Ed Yong stunned and delighted readers and critics with his dazzling début, "I Contain Multitudes," revealing, in granular detail, the invisible, indispensable world of the microbiome. My review for the Star Tribune proclaimed that he "belongs to the highest tier of science journalists at work today." Those words proved prophetic (if I may pat myself on the back): "I Contain Multitudes" vaulted onto the New York Times bestseller list, and in the intervening years Yong's coverage of the COVID-19 pandemic for the Atlantic won a Pulitzer Prize and was named a finalist for a National Magazine Award.

Now he's done it again, and then some. His sumptuous new work, "An Immense World," is a sweeping survey of animal senses, how and why they mold us even as they remain elusive. One doesn't pick up this book so much as fall into it.

Yong structures "An Immense World" around the German noun Umwelt, "the part of those surroundings that an animal can sense and experience — its perceptual world." Umwelt unfolds, meme-like, throughout the narrative, as Yong touches on the familiar — sight, sound, pain, and so on — and expands into non-human realms, such as echolocation and magnetoreception, "the only sense without a known sensor" and a holy grail for sensory biologists.

He leans into the mysteries but follows a clear through line, amplifying the science. "A bat must constantly adjust its sonar" when it stalks prey.

"To even find a moth in the first place, it must scour wide expanses of open air," he writes. "During this search phase, it makes calls that carry as far as possible — loud, long, infrequent pulses whose energy is concentrated within a narrow frequency band. ... The entire hunting sequence, from initial search to terminal buzz, might occur over a matter of seconds."

From bat sonar to dog noses to piscine electric fields, Yong's reporting is layered, seasoned with vivid scenes from laboratories and in the field, interviews with researchers across a spectrum of disciplines. Animal geeks will dine out on the rich anecdotes, the historical detours and pithy footnotes, all propelling his momentum. His prose is witty, capacious and erudite; he notes wryly that male mice "produce a pheromone in their urine that makes females especially attracted ... this substance is called darcin," after the male hero of "Pride and Prejudice."

Nature, then, is a costume drama, a multiverse, a profusion of wormholes: What goes into an ear may come out transformed. Yong moves beyond the known unknowns — just how does a mantis shrimp, with its complex eyes, see? Can mosquitoes taste body heat? — and toward unknown unknowns. Have we brushed against all the sense scapes or do more exist?

In its final act, "An Immense World" swells into philosophy and politics, underscoring the urgency of climate change. Yong's book melds epic journeys with intimate reckonings, one of this year's finest journalistic achievements.

A contributing books editor for Oprah Daily, Hamilton Cain reviews fiction and nonfiction for a range of venues, including the Star Tribune, New York Times Book Review, Washington Post and Boston Globe. He lives in Brooklyn.