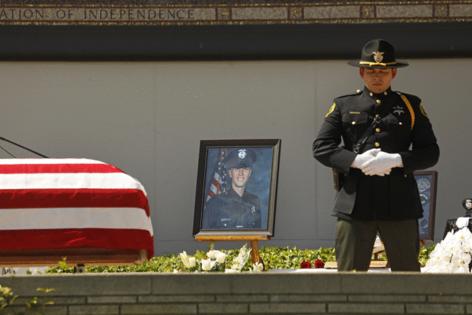 Officer Houston Tipping, 32, died after suffering a spinal cord injury while he was training with other officers last month at the police academy in Elysian Park. Moore, other police leaders and Mayor Eric Garcetti attended a large funeral for Tipping last week.

Police described Tippings’ injury and death as the result of a tragic accident that occurred while Tipping was in a “grappling” exercise with another officer.

But Tipping’s mother, Shirley Huffman, filed a notice of claim — the precursor to a lawsuit — against the city Friday alleging that her son had been brutalized during the incident. In the claim, Huffman alleged that her son had been participating in an exercise meant to “simulate a mob” and that he was “repeatedly struck in the head severely enough that he bled.” The beating, she claimed, resulted in injuries requiring stitches, in addition to the neck fractures that killed him.

In comments to the Police Commission on Tuesday, Moore said he felt compelled to push back after The Times and other media outlets reported on Huffman’s claims.

Moore said Tipping “did not sustain any type of laceration to his head” and was “not struck or beaten during this training session.” He reiterated that Tipping was “grappling” with another officer at the time.

Moore also said the department has launched an investigation into the incident and a review of the training in question.

Huffman’s legal claim called on the city to preserve any video of the training, but Moore told The Times on Tuesday that no video of the incident has been identified.

In response to Moore’s comments, Huffman’s attorney, Bradley Gage, said Moore was “either mistaken or misinformed.”

Gage said Huffman saw her son at the hospital, and has reviewed his medical records, and that Tipping had injuries that were “obviously a beating.”

Tipping also had a punctured lung, liver damage and broken ribs, Gage said. He acknowledged some of those injuries may have been suffered from life-saving efforts such as chest compressions but alleged the overall scope of injuries to Tipping went beyond that.