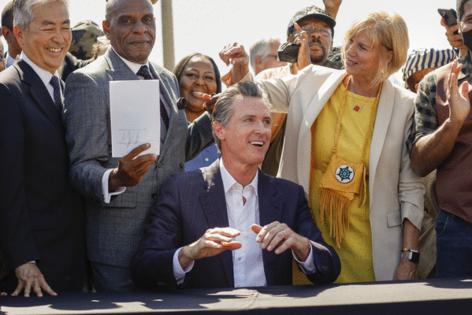 LOS ANGELES — The Los Angeles County Board of Supervisors unanimously approved an unprecedented plan to return Bruce's Beach to a Black family that had been run out of Manhattan Beach almost a century ago — paving the way for more efforts by the government to rectify historic injustices that were racially motivated.

In a heartfelt moment during the board meeting Tuesday, L.A. County Supervisor Janice Hahn reflected on all the work and all the people it took to get the legal, legislative and (very complicated) real estate details in order to right a wrong that had sparked a movement and captivated the country.

"We are finally here today," said Hahn, who launched the complex process more than a year ago. "We can't change the past, and we will never be able to make up for the injustice that was done to Willa and Charles Bruce a century ago. But this is a start, and it is the right thing to do."

The property will now enter escrow before officially transferring to the Bruce family. Once transferred, the county has agreed to rent the property from the Bruces for $413,000 per year and will maintain its lifeguard facility there.

The lease agreement also includes a right for the county to purchase the land at a later date for $20 million, plus any associated transaction costs.

In a public address to the board, George Fatheree, a real estate transaction lawyer who has been representing the Bruce family pro bono, thanked the many county leaders and staff "who have worked tirelessly to get to this point today … who approached this work with thoughtfulness, care, diligence, creativity, and above all, a commitment to doing the right thing."

"To our knowledge, this is the first time the government has returned property to a Black family after acknowledging it had been improperly taken," he said. "We're hopeful that it will not be the last."

The return of Bruce's Beach has forged a helpful path forward for other cities and states seeking to atone for past injustices. Many point to the country's history of violently dispossessing Indigenous people and displacing entire communities of color from prime real estate.

Tuesday's decisive action demonstrates what is possible when the political will exists — and when the public insists on accountability, said Effie Turnbull Sanders, who has spent more than 20 years advancing the rights of underserved communities and currently serves as the California Coastal Commission's environmental justice commissioner.

"We see now, with the example of Bruce's Beach, that if we want to as a society, we can find a legal way to effect justice," she said. "We can find a way to ensure that we don't continue to perpetuate the structural inequalities that have existed for centuries in this country."