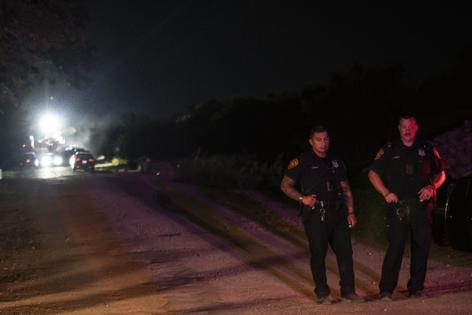 As federal investigators sought to connect the tragedy to the sprawling human trafficking networks that span from Central America to the United States, they announced that three people had been detained in connection with the case.

One was the driver of the truck, said U.S. Rep. Henry Cuellar of Texas. Two Mexican nationals in the U.S. illegally — Juan Francisco D’Luna-Bilbao and Juan Claudio D’Luna-Mendez — were charged with illegal possession of firearms after police traced the truck’s registration to a San Antonio address and then surveilled the house, according to criminal complaints filed against them.

World leaders including Pope Francis and President Joe Biden weighed in on the tragedy, with the pope urging prayer “for these brothers and sisters who died following their hope of a better life.”

The tragedy is sure to fuel debate over illegal immigration, an issue that Texas Gov. Greg Abbott has exploited politically as he seeks reelection this year. He has stationed National Guard troops and state police along the border with Mexico and bused migrants to Washington to spotlight what he calls Biden’s “open-border policies” — even as many Trump-era immigration policies remain in place.

Responding to the deaths, migrant advocates renewed calls for more legal pathways to enter the U.S. as well as harsher punishment for human traffickers on both sides of the border.

The trailer was discovered Monday evening near a stretch of railroad tracks in an industrial section of San Antonio after a worker heard a cry for help, San Antonio Police Chief William McManus said. The worker opened the doors, found “a number of deceased individuals inside” and called police.

First responders discovered 46 migrants dead in the truck along with 16 survivors — 12 adults and four minors — who were taken to hospitals. The survivors were too weak to exit the trailer on their own, said San Antonio Fire Chief Charles Hood, who described their bodies as “hot to the touch” and said there was no sign of water or working air-conditioning in the vehicle. Temperatures in San Antonio on Monday hovered around 100 degrees.

Bexar County Commissioner Rebeca Clay-Flores, who represents the area, visited two of the survivors at University Hospital on Tuesday — an adolescent boy in critical care whose nationality hadn’t been determined and a 23 year-old woman who said she had left Guatemala three weeks ago.