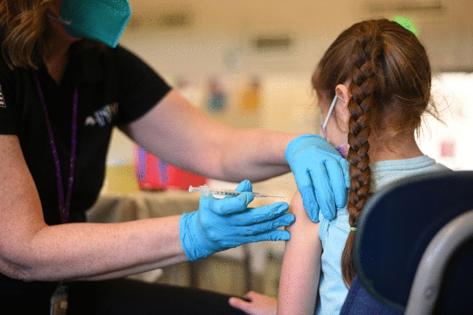 LOS ANGELES — The number of coronavirus cases reported in California is on the brink of crossing 10 million, a milestone that probably undercounts the total significantly yet still carries an increasing sense of inevitability.

Since the hyper-transmissible omicron variant stormed onto the scene in early December, the virus has wormed its way into seemingly every family and social circle. Residents who for years escaped infection were swept up in the resulting tidal wave of cases, though for many, the severity of illness has been lessened by vaccines, the availability of therapeutics and other factors.

A plethora of high-profile people who have recently tested positive — among them Vice President Kamala Harris, Gov. Gavin Newsom and even Dr. Anthony Fauci — have also fueled the notion that catching the coronavirus is no longer a matter of if, but when.

"It's going to get easier and easier to get and harder to escape infection. But that doesn't mean we put ourselves in a sort of mind-set that, 'You know, to hell with it. I'm just going to do anything I want to do anyway,'" Dr. Peter Chin-Hong, a UC San Francisco infectious-disease expert, said during an interview Friday.

It's understandable that some might view the coronavirus as inescapable, especially amid massive numbers of new infections.

Nearly half of California's officially reported cases — more than 4.9 million — have been tallied since Dec. 1, the day health officials confirmed omicron's presence in California, according to data compiled by The Times.

Officials note those figures are an undercount, and likely a significant one. According to data from the U.S. Centers for Disease Control and Prevention, the most recent seroprevalence estimate for California — the overall share of residents thought to have been infected with the coronavirus at some point — was 55.5% in February.

Still, that means there are likely millions of Californians who have never contracted the virus.

Among those are Chin-Hong, as well as Dr. Robert Wachter, chair of UC San Francisco's Department of Medicine.

"The fact that I and a fair number of people who continue to be careful and are fully vaccinated and boosted remain COVID-free tells me that it's possible we will continue to be that way, so I don't buy the inevitability argument," Wachter said in an interview Friday. "On the other hand, there are plenty of people who I know who have been just as careful as I have and have gotten it in the past few months, so I think there's some randomness to this."